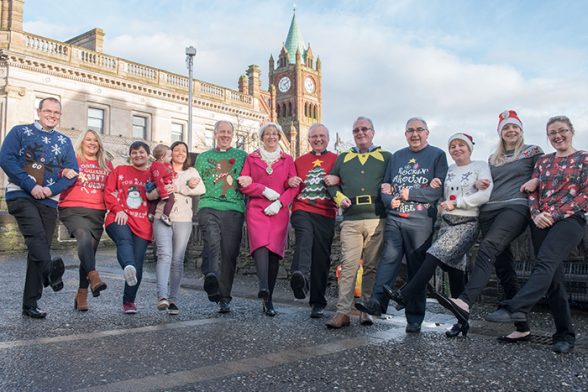 Over 3,473 people need to fill the city centre today, Sunday, December 18, to smash the current record – and it’s all for a good cause – with a number of charities set to benefit from the proceeds raised by the event.

The Foyle Hospice, Concern, Muscular Dystrophy UK#TeamEvan and Children in Crossfire have joined forces with the Mayor’s two chosen charities, Tearfund and Action Cancer NI, to raise some much needed funds ahead of Christmas and bring some extra festive cheer to Derry and Strabane.

The bid follows on from the success of the Christmas Santa record which was set by the city in 2007, when almost 13,000 people took to Derry’s historic Walls to clinch the record of the biggest number of Santas and Santa’s helpers in the world.

The current Christmas Jumper record is held by Kansas, and it’s hoped that as many people as possible will turn out in their best festive attire to support Sunday’s event to break the record in style.

The Mayor urged people to don their winter woollies for the six fantastic causes.

Said Alderman McClintock: “As we approach Christmas I’m sure we’re all conscious that while most of us look forward to a family celebration surrounded by loved ones, it can be a challenging and lonely time for some who have to do without.

“I really want to encourage people to take this opportunity to share in what promises to be a fun event and spread some festive cheer where it’s needed most.

“And if you want to take part you don’t have to invest in buying a new Christmas jumper.

“Why not get creative and come up with something that’s really unique and decorate your own jumper.

“Get out the tinsel, or any leftover decorations and come up with something truly unique. I look forward to seeing the results on Sunday!”

One of the many local organisations to support the record attempt is the Inner City Trust.

The Trust has given the charities the use of their building at 35 Shipquay St for a ‘pop up’ Christmas registration shop which will be open every day from 10am until 5pm, and up until 1pm on Sunday.

Participants are being asked to assemble in Waterloo Place today from 12 noon where the mixed voice choir, Cantamus, will lead the carol singing to create some festive cheer, before making their way through Magazine Gate led by the Glasgowbury Samba Band, where the official count will take place at 1pm.

MAYOR URGES EVERYONE TO COME OUT TODAY TO BREAK CHRISTMAS JUMPER WORLD RECORD was last modified: December 18th, 2016 by John