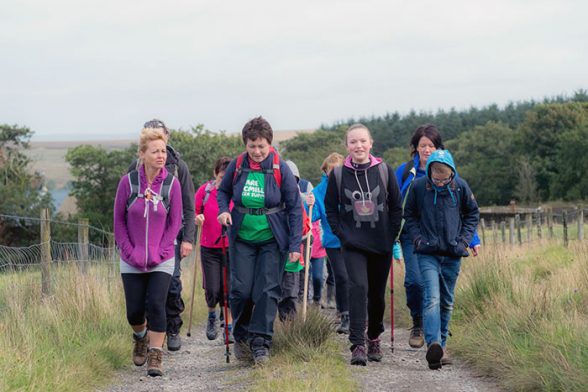 SPERRINS AND KILLETER WALKING FESTIVAL IN THE RUNNING FOR TOP AWARD

The annual two day event, run in conjunction with local adventure company Far and Wild, caters for walkers of all abilities and ages and attracted record numbers to the local area this year.

“This nomination is just reward for the dedication of the festival organisers who have worked tirelessly to establish it as one of the highlights of the local walking calendar,” she said.

“We are blessed with outstanding natural beauty in our region and this event not only encourages local people to go out and explore their own hinterland but attracts walking tourists from all over Northern Ireland and beyond to our area.

“Council are centrally involved in working to establish our region as a visitor destination for walking enthusiasts and growing the tourism potential of the International Appalachian Trail that runs through our district.”

Derry City and Strabane District Council’s Festival and Events Manager Jacqueline Whoriskey noted that the new routes that were introduced in this year’s event in September proved particularly favourable with walkers.

“The festival has become extremely popular with both serious walking enthusiasts and those who just want to get out and enjoy the natural beauty of the Sperrins,” she said.

“We attracted our biggest ever entry this year and our new routes such as the ‘Origins of the Ulster Appalachian Way’ 15k hillside and trail walk proved particularly successful.

“Every vote counts so I’d encourage local people to take a minute and help bring this title back to Derry and Strabane.”

There are a total of seven categories in the WalkNI Awards which celebrate all that is great about walking in Northern Ireland.

Everyone who votes in the awards will be entered into a prize draw to win one of two Mountain Warehouse walking outfits worth £250.

Other local nominees include the Sperrin Mountains for Favourite Walking Destination and Vinegar Hill Loop for Best View.

You can vote for them in the online survey at www.surveymonkey.co.uk/r/KC9NL7D.

More information on the Sperrins and Killeter Walking Festival is available at http://www.sperrinskilleterwalking.com.

SPERRINS AND KILLETER WALKING FESTIVAL IN THE RUNNING FOR TOP AWARD was last modified: November 30th, 2016 by John