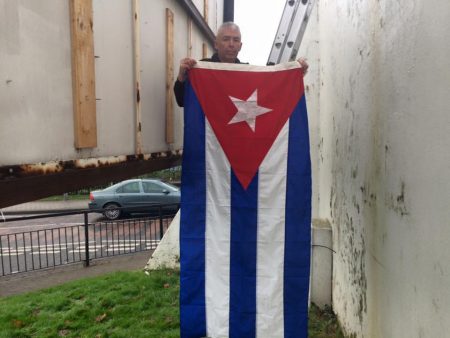 THE Cuban national flag was raised at Free Derry Wall at the weekend as a mark of respect following the death of Fidel Castro.

Said Sinn Fein Councillor Colly Kelly said: “It was important that following the death of Fidel Castro this mark of respect was carried out at Free Derry Wall.

The people of Derry have always had a great affinity for the people of Cuba and places like Palestine, the Basque country and South Africa.”

Meanwhile Sinn Fein president Gerry Adams arrived in Cuba’s capital Havana late last night to take part in some of the events to mark the death of Fidel Castro.

Speaking from Cuba, Gerry Adams said: “Fidel was an internationalist. He was keenly interested in the experiences of others.

“During our conversations, we discussed matters of mutual interest and concern including the issues of human rights, civil and religious liberties, democratic values, social justice, climate change, and equality.

“We also discussed the attacks on the USA on September 11th. He remarked that, following those attacks, no progressive struggle would be won by armed actions.

“They could only be won by the power of ideas and the mobilisation of people.

“More recently, the Cuban government has helped broker peace in Colombia and put an end to one of the longest running wars in modern history. 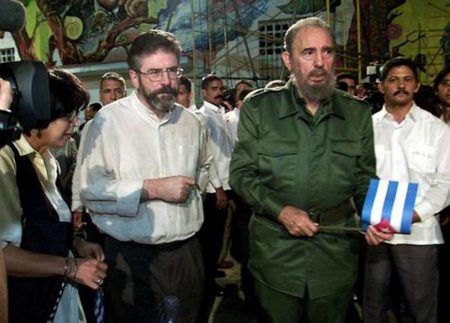 “On my last visit to Cuba in October 2015, I met with senior negotiators from FARC.

“The Cuban government facilitated that meeting. Other senior Sinn Féin representatives have also visited the region to discuss the Irish peace process with the negotiating teams of the Colombian government and FARC.

“The loss of Fidel Castro is a huge blow to the people of Cuba and to the world.

“People in Havana are genuinely moved by his death. Tens of thousands are filing through Revolution Square to pay their respects.

“I am here to extend my condolences and solidarity on behalf of Sinn Féin,”added the Louth TD.