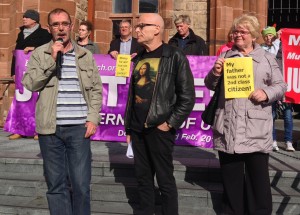 THE brother of a Bloody Sunday victim has said he now votes for the TUV because of its stance on abortion.

Liam Wray said he voted for TUV leader Jim Allister because he “does not trust” nationalist parties’ abortion policy.

Former Sinn Féin mayor Anne Brolly revealed on Thursday that she had quit the party over its stance on abortion.

Mr Wray and Mrs Brolly said there were many voters who shared their concerns.

In the North, unlike the rest of the UK, abortion is only allowed if a woman’s life is at risk or there is a permanent or serious risk to her physical or mental health.

In their 2016 manifesto, the TUV said that this was “sufficient” and that they were not in favour of any change in the law.

Liam Wray, whose brother, Jim, was shot dead on Bloody Sunday in 1972, told the BBC that he voted for the TUV in the European Elections because he is “pro-life”.

“I would normally vote nationalist or republican, depending on the candidates and on their policies, from I was able to vote at 18,” he said.

“This time around, the only party that I could see was unambiguous (on abortion) was either the DUP or Jim Allister.

Thirteen people were killed on Bloody Sunday when British paratroopers opened fire on a civil rights march through Londonderry in January 1972. A 14th died later.

TUV leader Jim Allister has previously described the Saville report, which investigated the events of Bloody Sunday, as a “jamboree”.

Mr Wray said it was a not an easy decision to break from his tradition of voting for the Sinn Féin or the SDLP.

“It was difficult, at the time, because I had to break from what my traditional view was. To support somebody who, for many years I had no time for and whose policies I thought were not mine.

“But I could not vote for a party, that in all consciousness, does not support pro-life in regards to protecting the most vulnerable in our society.

“It’s not that I’m anti-women, and I hope I say this right, but I don’t think it’s a woman’s choice.

“I’m a grandfather and a father and in those situations I’d like to think I’d be supportive. I do understand that it is a terrible difficult situation for women but I think sometimes it’s very blasé for politicians.

In a statement to the BBC, a spokesperson for the TUV said: “The TUV is not in the least surprised that people from a traditionally nationalist or Roman Catholic background choose to vote for the party because of our clear stand on issues such as abortion.

“It is clear from looking at votes in the European election that the party was receiving votes from what is traditionally described as the “community divide”.

“Additionally, we regularly receive correspondence and phone calls from people in the Roman Catholic community commending us for our stance on abortion.”