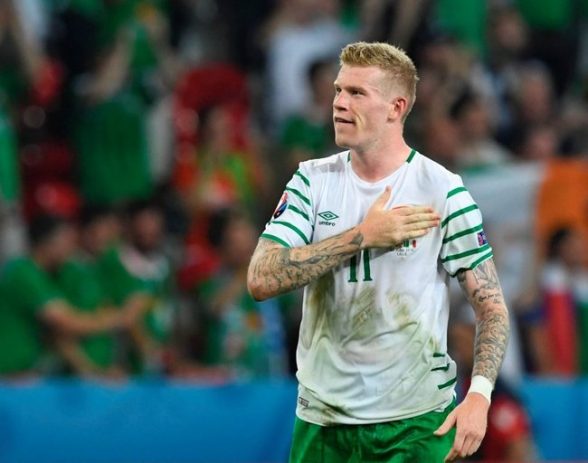 IT WAS ALL A JOKE, SAYS SHIELS AFTER JAMES MCCLEAN SLATED DERRY BOSS FOR ‘ENGLAND RESERVES’ COMMENT

DERRY City football manager Kenny Shiels has tried to defuse a row which erupted after he called Republic of Ireland’s team as ‘England Reserves’.

His comments angered Creggan-born Republic of Ireland international James McClean who launched a blistering attack on Shiels saying his remarks were “insulting”.

But the Candy Stripes boss says he was only having a “bit of banter” with soccer writers from the Republic.

During his interview with the Irish press, Shiels, who hails from Upperlands in south Derry, lit McClean’s blue touch flame by making reference to the number of footballers born in England and elsewhere who qualify for international squads on both sides of the border through their ancestry.

The 60-year-old added that he believed “international football is not what it used to be” and that there was “no pride in it any more because, once you have had a pint of Guinness, you could play for Ireland”.

Proud Derry man McClean, who played for Northern Ireland at junior international level before switching allegiance to the Republic, took exception to the remarks.

The West Brownich Albion winger said he decided to “hold his tongue” until after Derry City had secured third place in the southern Premier Division and qualified for European football next season.

“What right or what credentials does Kenny Shiels hold to make such ridiculous comments on international football?” asked the West Brom winger and former Candystripes star.

“For me, playing in the Aviva Stadium in Dublin in front of thousands of people and wearing that green jersey means so much to me and my team-mates.

“He (Shiels) said Italians and Scottish people play for Ireland, but so do players such as David Forde, Seamus Coleman, Wes Hoolohan, Stephen Ward, Daryl Murphy and myself, players who graduated through local League of Ireland football.”

The 27-year-old also told the Derry Journal: “Talk is cheap, but every local player harbours an ambition to play at the highest level possible.

Kenny Shiels says his ‘England Reserves’ remark was “a joke”

“I think Shiels has done himself no favours with these insulting outbursts regarding international football.

“He’s actually been laughed at and ridiculed on television following the comments and I don’t believe a Derry City manager should be viewed as a comedian”.

But Shiels, who managed several Irish League clubs including Coleraine and Ballymena United, has responded by saying: “This has all been taken out of context.

“I was having a joke with reporters from Dublin and Dundalk and that’s all it was – a bit of banter; something said purely in jest a couple of months ago.

“We were winding each other up – and McClean knows that.”

IT WAS ALL A JOKE, SAYS SHIELS AFTER JAMES MCCLEAN SLATED DERRY BOSS FOR ‘ENGLAND RESERVES’ COMMENT was last modified: October 26th, 2016 by John