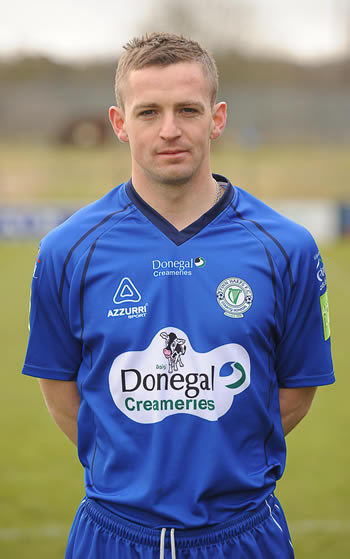 KEVIN McHugh, the ex-Derry City striker, has called time on his footballing career.

The Donegal man suffered a horrific injury and lost a finger in a freak accident last week.

Today the Finn Harps striker officially announced that he is hanging up his boots and not kicking another ball again.

Instead he will concentrate his time between work, family and coaching.

Kevin told finnharps.com “Yeah, obviously a disaster for me personally with the recent accident and ultimately finishing my career at this level.

“It’s not how I imagined leaving the club, but that’s life in general isn’t it?

“No-one knows what’s around the corner, but you just have to get on with it.

“Between managing/coaching and work/family I’ll be kept pretty busy anyways.”

The father of two runs the Donegal Soccer Academy and is keeping a close eye on emerging talent.

Kevin, who works in the IT department of Donegal County Council, admitted that the tempo of the Premier Division is relentless but he is confident Harps can stay up – and will get stronger next season.

“It’s an unforgiving Division, mistakes are punished and every point you get is well earned, so if Ollie is able to keep us up it will be a very successful season, despite all the recent negative press.

“This season will stand to this group in terms of tempo of the games, fitness levels and the realization of the commitment it takes to be a proper footballer in the premier division. It really is relentless.”

A spokesman for Finn Harps wished Kevin every success for the future and hinted that they will honour his contribution to Harps in the coming weeks.

“Harps players, management and volunteers are looking forward to recognizing Kevin’s huge contribution to the club and wish him the very best in his recovery,” said the spokesman.

After a brief spell with Omagh Town in the Irish League he joined Derry City in 2006, scoring 12 goals in 88 appearances over a three season period.

After a brief spell with Linfield in the Irish League he returned to Finn Park in 2010, scoring 31 goals in 88 appearances.