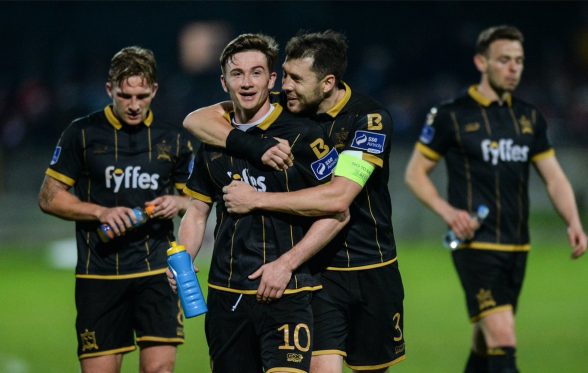 DUNDALK FANS AND COACH ATTACKED BY MINDLESS THUGS OUTSIDE BRANDYWELL A young Dundalk fan had to be treated in hospital last night after being attacked outside the Brandywell ground.

The supporter was hit on the head with a suspected bottle hurled from a mob of thugs as he left the ground.

He was taken to the accident and emergency department at Altnagelvin Hospital but his injuries were not said to be life threatening.

The Dundalk fans and their coach were attacked at Lecky Road by a gang hell bent on causing trouble following Derry’s 2-1 defeat in the Irish Daily Mail FAI Cup replay.

Describing the behaviour as “disgraceful”, Councillor Gary Donnelly said a teenager was hit with a bottle in the incident:

“A number of travelling fans had to be protected in a local bar after their bus was attacked.

“Windows were broken, tyres slashed and UTH and other slogans sprayed on it.

“A 14 year old was bottled on the back of the head and an elderly gentleman accompanying him pushed to the ground.

“The visiting fans only left the city at 11.15 pm after a crowd of young people dispersed.

“Cllr Darren O’Reilly and myself escorted them out of the area as far as Prehen.”

He said that there was a group of people going round the area causing mayhem, adding: “People know who they are and they should be telling the right people.”’

Sinn Féin Councillor Patricia Logue has condemned those responsible for the attack on the young boy and for vandalising the Dundalk supporter’s bus.

Councillor Logue said: “What happened to the Dundalk  supporters and one of their buses is absolutely disgraceful.

“I would like to commend local residents, community workers and CRJ who came to their aid and tried to help them as best they could.

“Once again this area, the local football club is being left to pick up the pieces after a gang came here intent on starting trouble, causing injury and damaging property.

“They need to hear very clearly they do not represent this community or Derry City Football Club.