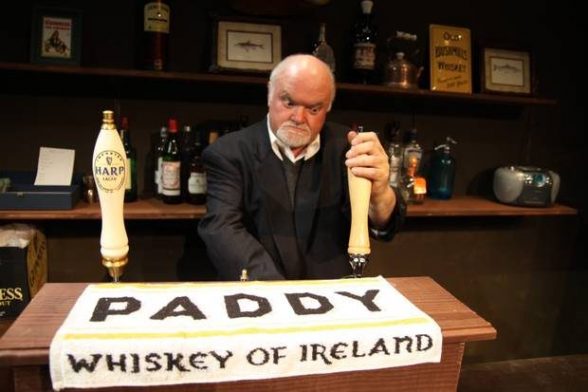 Gordon Fulton, playing the part of Sammy the barman, who has passed away in Derry aged 67

TRIBUTES have been paid after the death of versatile Derry actor Gordon Fulton, who appeared in the hit global TV series Game of Thrones and the local sitcom Give My Head Peace.

He passed away in his adopted city of Derry aged 67.

Ironically, his death came just before stars from the Hole in the Wall gang gathered in Belfast to record their first episode of Give My Head Peace in nine years

The one-off special will be dedicated to Gordon, whose death has stunned the cast and crew of the TV series.

“We were devastated when we heard the news of his passing,” said ‘Da’, actor and series creator Tim McGarry.

“Gordon wasn’t just a fine character actor, he was also a gentleman and we all loved working with him.”

Gordon played the part of Sammy, the barman of the loyalist Kneebreakers drinking den, for 10 seasons of Give My Head Peace.

He was to appear in one episode of the new series.

“Gordon was so good and made the character out of nothing. Sammy was so believable and so funny that we just kept him in lots of programmes.

“He was really easy to write for, and the other actors who played Uncle Andy (Martin Reid) and Big Mervyn (BJ Hogg) in the Kneebreakers blended perfectly with him.”

Gordon was a late recruit to the ranks of professional theatre.

He started his acting career with the Derry-based amateur group, the 71 Players, founded by the late Bishop Edward Daly in St Columb’s Hall.

At the age of 33, Gordon went to study at the Royal Scottish Academy of Music and Drama in Glasgow.

In one interview, Gordon, who starred in the Scottish detective series Taggart in the 1980s, said: “I’ve never looked back since taking up acting and I’m glad to say I have no regrets.”

In 2012 Gordon was seen by millions of Game of Thrones fans right across the world in the second season of the hit HBO series. He played the role of Lord Portan in one episode, The North Remembers.

Gordon was a much-in-demand theatre actor and appeared regularly with Roma Tomelty’s Centre Stage company in plays like Krapp’s Last Tape and Last of the Red Hot Lovers.

He also acted with the Tinderbox Theatre Company and one of his last stage roles was as a priest in a Brassneck Theatre Company production of the Sweety Bottle at the Grand Opera House in Belfast.

In 2011 he appeared in the Conor McPherson play, The Weir, in the Keegan Theatre in Washington DC, where he had studied in the 1980s.

He also had a number of roles in films like Salt on Our Skin, Wilderness, and Sunset Heights.

But it was his portrayal of Sammy the barman in Give My Head Peace which got him recognised in Northern Ireland long after the character had vanished off the TV screens.

And McGarry revealed that Sammy was almost written into the one-off special that was recorded last night.

Said Tim: “We were planning to go back to the Kneebreakers for one of the scenes and Sammy was in our thoughts, but in the end we placed the action elsewhere.”

Tim said he had met Gordon recently. “He was in great form and he was just back from Berlin, which he loved,” he added.

Actress Roma Tomelty said Gordon was a consummate actor who could play a huge range of parts, from Shakespeare to Sam Cree.

She added: “He also took classes in our summer schools for 20 years and passed on his enthusiasm about Shakespeare to hundreds of children who called him The Legend. My husband Colin and I were talking to him just a few days ago about a project in February. We are heartbroken. He was our best friend.”

The day before his death Gordon posted a photograph of a tranquil woodland path on his Facebook page.

Tim says producers of Give My Head Peace are also planning to incorporate a dedication to Gordon at the end of the episode recorded last night.

Gordon is survived by his wife, Ann, their two sons and a granddaughter.

The actor will be buried in Derry’s City Cemetery after Requiem Mass tomorrow at 11 am at St Patrick’s Church, Pennyburn.