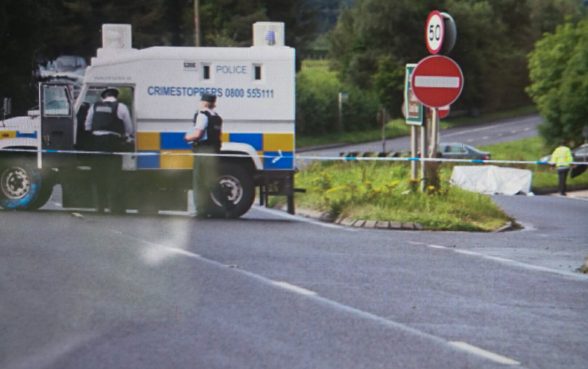 THE man who died in a car accident on the outskirts of Derry yesterday morning has been named as father-of-two Paul Crossan.

Mr Crossan, who was in his forties and from the Gobnascale area of the city, died when his Ford Ka car was involved in a two-car collision on the Clooney Road dual-carriageway early on Sunday.

Prayers were said for Mr Crossan at all Masses in the city’s Waterside area.

A police spokesman said a man and women, who are both in their fifties and were travelling in the other vehicle, were taken to Altnagelvin hospital.

However, their injuries were not believed to be life-threatening.

The collision occurred at 12.50 am between the Maydown and Gransha roundabouts on the main Derry to Limavady road.

SDLP MLA Mark H Durkan has offered condolences on behalf of the party to Mr Crossan’s family and friends.

Mr Durkan said: “It is with great sadness that I have learned of the death of a local man on Saturday night on the Clooney Road.”

The MLA he regularly travelled the stretch of road where the accident occurred every day and knew how dangerous the junction could be.

“I believe the occupants of the other car have suffered significant injuries which thankfully are non-life threatening,” Mr Durkan said.

“It is of course a traumatic experience for all involved and I sincerely hope they make a quick and thorough recovery.”

Police at Strand Road station have appealed for anyone with information about the accident to contact them on the 101 number.