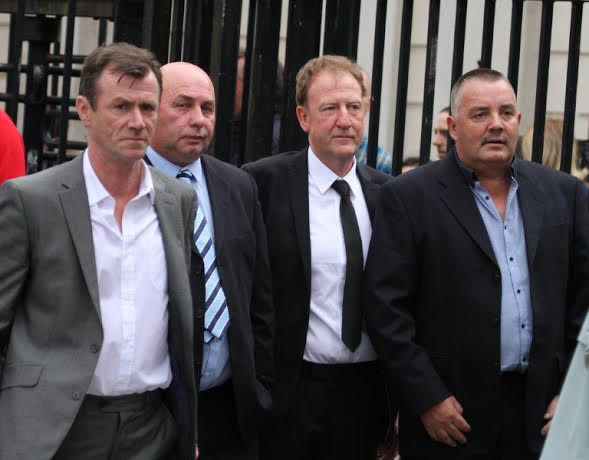 CAMPAIGNERS say there has been “absolutely no movement” by police into alleged criminal activity within the Police Ombudsman’s Office linked to the ‘Derry Four’ case.

But PSNI has defended its handling of the investigation saying that because of financial cutbacks it has to “prioritise our resources against the potential threat, risk and harm to the public.”

The so-called Derry Four then skipped bail and fled across the Irish border.

They remained outside of Northern Ireland for nearly 20 years before they were acquitted of all charges in 1998.

Their treatment by the RUC was investigated by the Police Ombudsman and in 2012, the matter was referred to the PPS.

In 2014, the prosecution of two former police officers in connection with the interrogations of ‘The Derry Four’ collapsed after the PPS received new information from the Ombudsman.

In the wake of that collapse, the PSNI was called in to look at how the complaint by the four men was investigated by the ombudsman’s office.

As a result, the men could not be given the final Police Ombudsman’s report.

Paul O’Connor from the Pat Finucane Centre, told BBC Radio Foyle: “Since the original accusation was that police were involved in the abuse of these teenagers, we thought it totally inappropriate that police would be involved in how that abuse was investigated.

“What has happened since is absolutely nothing. We’ve constantly been in contact with the PSNI to ask when they are going to look at this issue and there have been no moves whatsoever.

“As long as this situation continues, the men cannot receive their report and yet they logged their complaint 11 years ago,” added Mr O’Connor.

In a statement to the BBC, Det Supt Kevin Geddes said: “The PSNI fully understands and acknowledges the concerns raised in relation to this.

“The PSNI is carrying out an investigation into alleged criminal activity within the office of the Police Ombudsman linked to this case.

“As stated before, we remain committed to carrying out a full and thorough investigation however, given the current financial and resourcing climate the PSNI is operating in, we must prioritise our resources against the potential threat, risk and harm to the public.”

Mr O’Connor said: “The latter part of that statement tells you everything, that as long as there is a threat out there this will be put on the backburner.

“I can think of no greater priority than clearing up the issue of the abuse of four teenagers charged wrongly with the murder of a soldier.

“It is simply unacceptable and I can tell you that there has been no attempt by the PSNI to contact the Derry Four over the last 18 months,” he added.