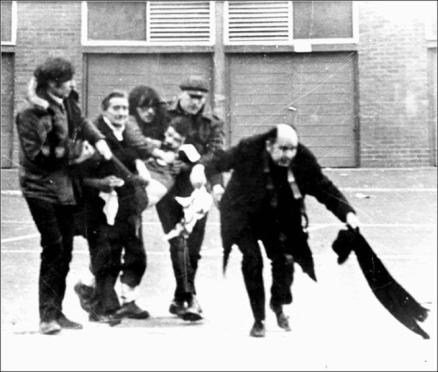 IT has emerged today that all former British soldiers associated with Bloody Sunday have now been interviewed, 44 years after the incident.

Bloody Sunday, also known as the Bogside Massacre, refers to the 1972 massacre in which British soldiers opened fire onto a crowd of 26 unarmed civilians who were marching against internment, claiming the lives of 14 people.

One of the fatalities was seventeen year old Jackie Duddy, who is seen in the famous picture of Bishop Edward Daly waving a blood-stained handkerchief while rushing the teenager to safety.

Bishop Daly anointed Jackie and gave him his Last Rites.

Derry MLA Eamon McCann said today: “The end of the Bloody Sunday saga may not be near, but it is at last in sight.”

The investigation into the murders of 14 unarmed civilians is being conducted by the PSNI’s Major Investigation Team in Derry.

It will now compile a report for the director of the Public Prosecution Service Barra McGrory QC to consider with a view to mounting prosecutions against the soldiers.

One soldier, who later worked in the Maze and Maghaberry prisons, was arrested last year at his Co Antrim home for questioning.

Following a High Court challenge in London, the remaining British soldiers detectives wanted to quiz won a case in which the PSNI would have to travel to England and arrange to question the squaddies at an appointed police station by arrangement.

They had objected to police plans to come to England and formally arrest them for questioning.

The decision to start the police inquiry resulted from the Saville Inquiry which stated all 14 civilians killed were unarmed and that the soldiers had opened fire first.