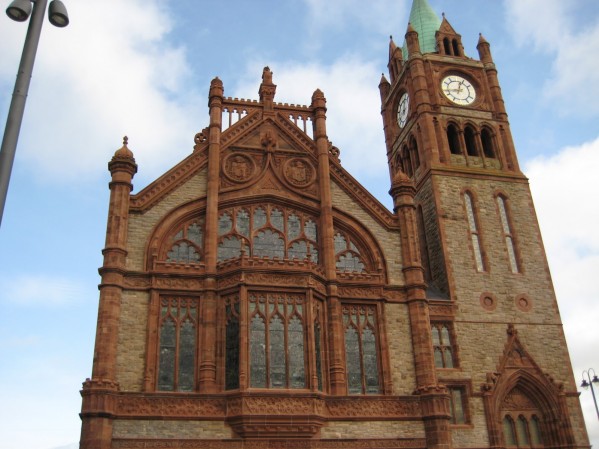 The iconic landmark, which is the local civic hub and home to the city’s Mayor, has been transformed following the complete regeneration of the building and the introduction of a range of enhanced visitor services.

Ald. McClintock said she was delighted to make the presentation to Kevin and Christine Keenan from Randalstown on their visit today.

“It’s fantastic to reach this milestone in our visitor numbers.

“I am lucky enough to be based in this beautiful building during my term in office, and I love to see the wide variety of visitors from all over the world exploring its historic rooms.

“Since the restoration we have had so much interest in the building, which is used now for a wide range of purposes from a stunning events venue to an exquisite wedding location.

“It’s a real treasure in terms of the city’s built heritage and tourism offering.”

Named in honour of its connection to the City of London and its Guilds, The Guildhall was first opened in 1890, financed by The Honourable The Irish Society.

A focal point for locals and visitors alike the building boasts some of the finest examples of stain-glassed windows in the whole of Ireland.

Also on display is an impressive exhibition on The Plantation of Ulster, and one of the most beautiful attractions of the building is the 3132 pipe organ, which was originally financed by public subscription in 1914.