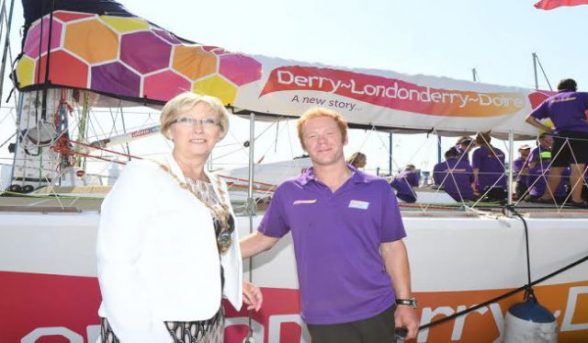 The Mayor took the opportunity to invite Skipper Daniel Smith and the team along to thank them on behalf of the district for their fantastic performance in the Clipper Round the World Yacht Race, and their second place finish in the Legenderry Finale race from New York to Derry.

The crew arrived to a glorious welcome on the Foyle last week, where they have been joined by the eleven other Clipper Race yachts for the duration of the Foyle Maritime Festival which got off to a busy start at the weekend.

At the reception the team viewed a special short film titled ‘The Journey Home’ documenting the dramatic race, captured by documentary film maker Rich Edwards from the event’s Host Broadcaster, 1080 Media TV. Rich has moved around the fleet throughout the race to record the crews’ experience for the global television series ‘The Race of Their Lives 2’.

Speaking after the reception, Ald. McClintock said she was proud to extend the best wishes of the district to the DLD crew. “I was delighted to welcome Daniel and the team to the Guildhall, it was the perfect opportunity to get speaking to them properly following their rapturous welcome last week. They have had a few days now to settle in and get some rest after their challenging journey across the Atlantic and they’re delighted to be here for the festival.

“I waved them off as they left New York and it was great to be able to find out more about their battle with LMAX Exchange for first place. They did amazingly well, and I know that everyone in Derry and Strabane are so proud of their performance to date.

“The maritime festivities are now in full swing and I would encourage people to take the opportunity to visit the Clipper Race yachts on the open boat tours later in the week, and have a chat to the crew and find out more about their adventures. When you see the conditions on board you won’t be able to believe the daily challenges the teams face just performing basic tasks like cooking and washing, never mind when they’re actually racing.

“I have so much admiration for their levels of stamina and their spirit of adventure in completing such a difficult physical and psychological challenge.”

It was an emotional moment as the crew relived some of the drama of their ocean crossing, and Skipper Daniel Smith thanked the Mayor for the warm welcome they have received since their arrival. “We just want to say a huge thank you for the magnificent welcome the city has given us,” he declared.
“We are very proud to be representing Derry-Londonderry around the world and now to be here to celebrate and experience your great city for ourselves.”

The public will have the opportunity to show their support for the Derry crew when they take to the stage in the Guildhall Square on Wednesday evening, July 13, for a special Prize-giving Ceremony.

The event kicks off at 7pm, before the audience is joined by hundreds of crew members, friends and family from 7.45pm, for a colourful celebration to remember as Seo Linn headline a musical tribute to the men and women who have battled the elements to complete this epic sporting challenge.

The Prize-giving will take place at 8.30pm and you can show your support for the home team by donning the Derry’s trademark purple as they collect their second place prize on the night. Live music will continue until 10pm.

For more information on this event and to see the full Foyle Maritime Festival programme go towww.foylemaritimefestival.com