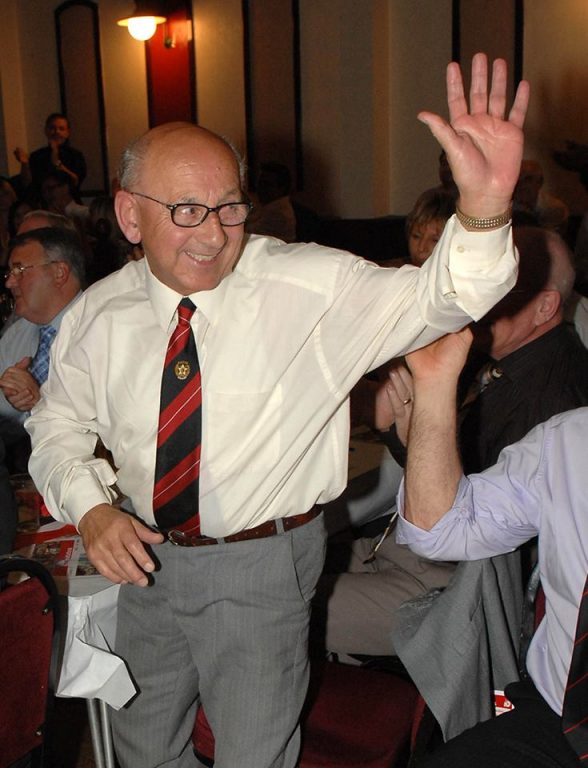 TRIBUTES have been paid to former Derry City winger Arthur ‘Mousey’ Brady who has sadly away.

Brady was a member of the Candy Stripes 1954 IFA cup winning side.

‘Mousey’ – as he was affectionately known – died on Friday night four days before he was due to celebrate his 89th birthday.

Derry City FC said: “It is with great sadness we have learned of the death of one of our 1954 IFA Cup winning side, Arthur “Mousey” Brady.

Arthur also played for Crusaders Football club in north Belfast where the players lounge is named in his honour.

He remained ‘hands on’ in the game as a scout for a Premiership Club.

Following news of his death, Jim Magilton, Elite Performance Director with the IFA and former Northern Ireland player tweeted: “So sad to hear about Arthur Brady. He had a tremendous influence on my early career and is a huge loss to the game.”

Crusaders chairman Stephen Bell said: “On behalf of The Board, Management, Players and Supporters of Crusaders Football Club can I offer my sincere condolences to the family of Arthur Brady on the passing of such a wonderful gentleman.

“Our thoughts and prayers are with you and the extended family circle at this time.

“I was shocked this morning when I received the news about Arthur. He was and is a legend at Seaview and will be sadly missed by everyone at the Club.

“‘Mousey’ as we all knew him came to virtually every match at Seaview and stood at the same spot each week right beside where the old players tunnel used to be.

“There are many wonderful stories about Arthur that have been told, and a lot of them came from the man himself, but his character and smile will sadly no longer been seen around the ground.”

Stephen concluded: “Arthur was one of the first to be inducted in the Crusaders Hall of Fame and we also have the Players Lounge named after the man.

“This is how much he was thought of and those who knew him and the few who are left that actually saw him play are testament to that fact.

“Again our thoughts are with the family.

“Crusaders have lost one of their own.”