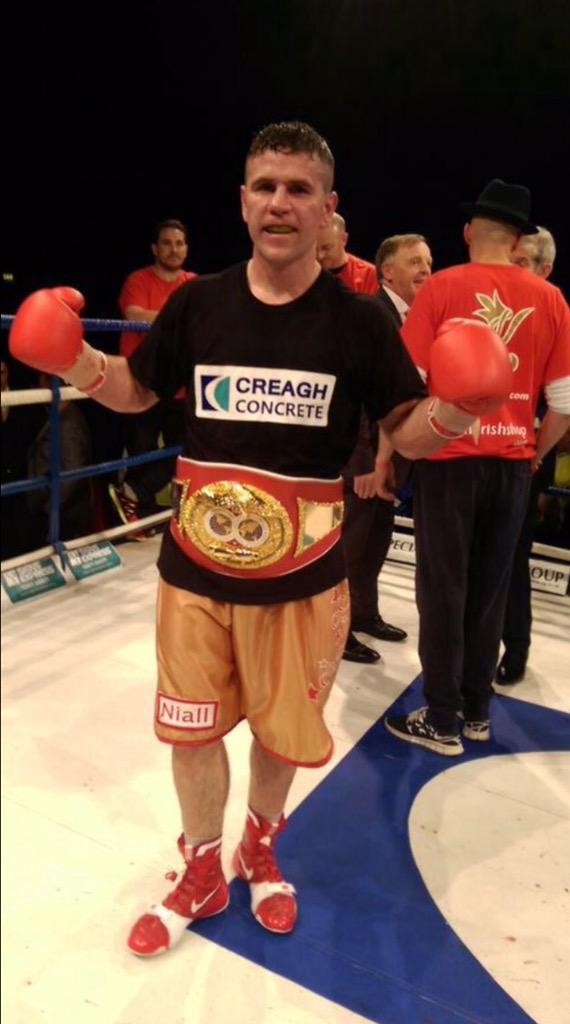 EAMONN O’Kane has announced his retirement from professional boxing.

‘King Kane’ said in a statement that the time had come for him to listen to “my family and also my body.

O’Kane retained retained his IBF Inter-Continental title against the unbeaten Lewis Taylor at Lavey’s GAC in Maghera in May last year.

But his hopes of securing a world title bout took a hammer blow five months later.

Despite a brave effort, he was well beaten on points by Tureano Johnson in a final eliminator in Madison Square Garden.

It proved to be the Coy Derry man’s last professional fight as he announced yesterday that he was hanging up his gloves.

“This is not an easy statement for me to release but it’s the right time to do it and for the right reasons,” said O’Kane in a statement.

”As of today I am retiring from the sport I have loved and taken part in since being a teenager.

”I have been blessed to have travelled the world with Boxing and had experiences I would never have had if not for this beautiful sport.

“Although I didn’t win my last fight at ‘The Garden’, I left everything I had there that night and going by the feedback I received on the night and since, didn’t disappoint the boxing fans which it has always been my desire to please.”

Eamonn and his wife Nicola have two young children, Charlie and Oscar, and with a third child on the way, the considerable time spent training at Paddy Fitzpatrick’s gym in Swindon has eventually took its toll.

A multiple-times Irish champion as an amateur, he joined up with Fitzpatrick in late 2014 after splitting from Bernard Checa, and had spent long spells of the last two years away from his family in England.

His statement continued: “After listening to my family and also my body, I have decided it’s time I hang them up.

”It has been a very hard decision to make and one I have fought with as hard as any competitor but one that ultimately I feel is the best one to make for not just me but my beautiful wife who has always supported me, and the rest of my family.

“I have spent long periods of time away from them and now with another child on the way, it’s the right time to acknowledge my blessings and be here with all of them.”

O’Kane cited a neck injury suffered in preparation for what was to be his next bout, against Spike O’Sullivan in Belfast this September, as another factor in his decision.

“That for me was going to be my swan song, giving the great Irish fans a fight they could all get behind against a class competitor and hopefully allow me to bow out with a win (which we will now never know) in a fight Ireland would remember.

”Unfortunately life doesn’t always go the way I have wanted it, and I’m guessing anyone reading this will agree with its the same for them.”

The 34-year-old middleweight turned professional after returning from Delhi with Commonwealth gold in 2010.

He won 14 of his 17 fights since his debut victory over Lithuanian Dmitrij Kalinovskij in Cardiff five years ago.

The boxer He went on to win the Irish, British and IBF inter-continental middleweight titles, the latter secured with an impressive victory over Kerry Hope at the Odyssey Arena in 2013.