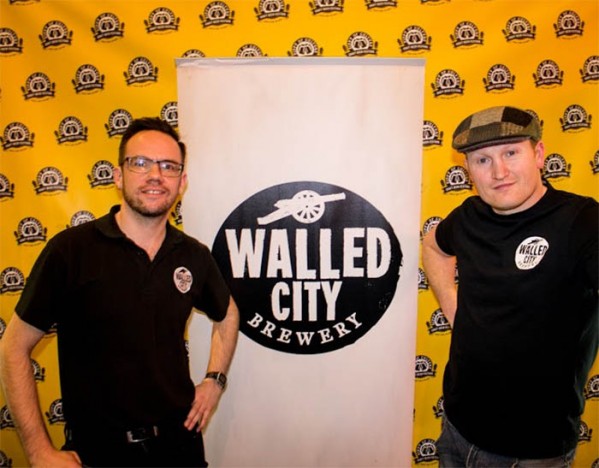 James Huey has guaranteed that no-one will suffer in the sampling of the new artisan craft beer as he will be leaving a few of the rarer and less savoury ingredients from 1689 out of the mix.

James explained: “When I was setting up the business I began researching the history of the city and found this very unusual beer from the Siege diaries which was more of a herbal elixir.

“We are trying to recreate that beer for the first time in 400 years and it’s going to be very unique. The original recipe had about 77 different herbs and spices and we found that about 30% of them are extinct, and 20% have been declared poisonous by the World Health Organisation.

“Part of the recipe also had 11 uncooked eggs added at the end of the fermentation which is just bizarre and we are not going to do.”

The Walled City Brewery is one of a number of local breweries from the North West and beyond taking part in Derry City and Strabane District Council’s Big Cheese & Beer Expo in Guildhall Square this weekend from Friday, April 15th until Sunday, April 17th.

The three-day event is a major highlight of the NI Year of Food and Drink 2016 programme, celebrating some of the finest craft beers and cheeses being produced locally as part of Brewing and Distilling month.

The event is supported by the Tourism NI Event Fund and by DARD under the Northern Ireland Regional Food Programme.

James Huey says he’s “really excited” about the event which will be the city’s biggest craft beer festival since Culture Tech in 2013 and Sippy of Culture in November 2015.

“It’s great to see the regularity of beer festivals and the pairing with cheese which will complement each other and showcase what we are doing here in the North West.”

James, a native of Muff in Co. Donegal and his Dubliner wife Louise, who opened the Walled City Brewery last year in Ebrington Square, hope to launch their new and as yet unnamed Siege of Derry craft beer to coincide with the Year of Food’s Legacy month in November.

Customers to their popular brew house and restaurant are meantime quenching their thirst on a selection of flavoursome craft beers also linked to the city’s colourful history – Boom, a Derry pale ale; Stitch, inspired by the many shirt factories; and Kicks, a nod to the greatest band to come out of Derry, The Undertones!

The celebrity guest among all the local brewing, cheese and culinary talent will be Sean Wilson, aka Martin Platt from Coronation Street, now a chef and celebrated cheese-maker who will be doing live cookery demos in the Festival Marquee at 2pm and 4pm on Saturday, April 16th.

The Big Cheese & Beer Expo will also feature an impressive array of family-friendly activities during the daytime with live music including The 4 Of Us in the evening and opens on Friday, April 15th, 5pm-10pm continuing on Saturday, April 16th, 1pm to 6pm and 7pm to 11pm; and Sunday, April 17th, 1pm to 5pm. Admission is free.

To find out more about the event go to www.derrystrabane.com/food.