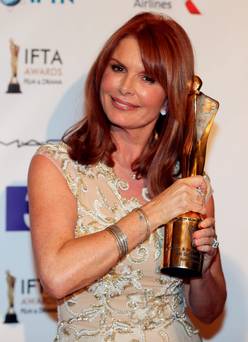 Roma Downey picks up her Irish Diaspora Award in Dublin

The Derry-born star was celebrating again with family last night after she was handed the inaugural Irish Diaspora Award at Dublin’s Mansion House.

The 55-year-old former Thornhill College pupil from the Bogside is now one of Ireland’s richest women.

She has carved out a successful career in which she won the hearts of Americans as Monica in hit CBS TV show Touched by an Angel.

Roma is now a major producer, with hits such as The Bible.

But the star admitted she still misses her home city.

“While I’ve spent most of my career in the United States, I’m a Derry girl at heart, and I’m delighted to be home” she said.

“I do miss home, but sometimes when I come home, I still miss it.

“So what I miss is the past, you know – when my mum and dad were alive.”

During the awards, Downey paid tribute to the other big Northern Irish winner of the night, Liam Neeson. The Ballymena star of Schindler’s List and the Taken series was presented with the award for he Outstanding Contribution to Cinema Award presented by Irish president, Michael D Higgins.

Derry director Stephen Fingleton picked up the Rising Star award for his film The Survivalist.