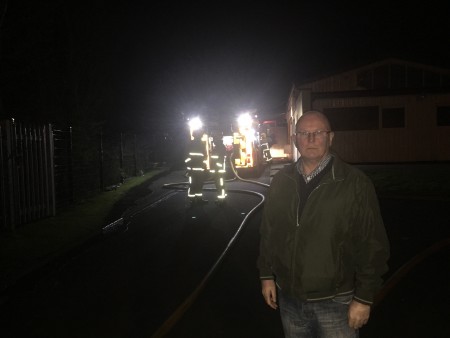 POLICE are investigating an arson attack on a primary school in Derry.

The fire at Holy Child Primary School in the Creggan area was reported shortly before 9.30 pm last night, Monday, April 4.

Around 20 firefighters and four tenders attended and tackled the blaze which was started in the roof.

The blaze was eventually brought under control shortly before midnight.

A Fire and Service Service said it is believed the fire was started deliberately.

“Quick actions from the crews who attended both from Northland and Crescent Link Fire Station were able to extinguish the fire quickly, and prevent the fire from getting into the actual structure of the building which saved the building and meant it will continue to function as normal today.”

The school said the blaze caused little damage and the school will open today, Tuesday, April 5, for pupils.

Speaking from the scene after vandals set fire to the roof of the primary school, Sinn Féin Councillor Kevin Campbell said:

“I would like to thank the work of the Fire Service who dealt with this fire and would appeal to anyone in the community who has any information on who was involved in this incident to bring it forward to the police.”