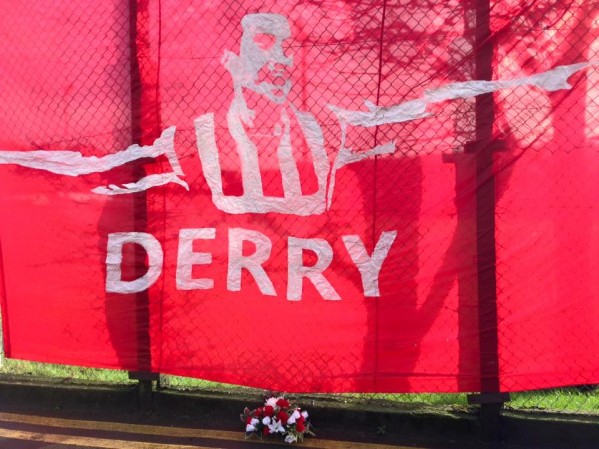 THE footballing fraternity in the North-West and beyond are Paying their tributes to Derry city striker Mark Farren who sadly passed away in the early hours of this morning.

The footballing community in the North-West has been left numb at the devastating news this morning.

Tributes from all over Ireland and the UK with former teammates taking to social media to pay tribute to a man they called a legend, a gentleman and a great, great friend.

For Derry City player Liam Coyle described Mark as a “legend and a good man”.

The Creggan lad posted on Twitter: “Gutted to hear news of the death of my former teammate Mark Farren.

“Great player, even better man. Prayers are with his family, RIP buddy.”

Finn Harps captain Kevin McHugh played with Farren during Derry’s epic UEFA Cup in 2006 and he took to Facebook to express his sadness at the passing of his close friend.

McHugh posted, “The news nobody wanted to hear, we have lost one of the finest personalities and footballer’s on and off the pitch today.

“My heart goes out to Terri Louise Farren, Holmes family and the Farren family, they could not have done anymore for Mark.

“His legendary status within football in this country and beyond is unquestionable. Hard to put into words how much of a gentleman Mark was.

“Such sad news this morning hearing that Mark Farren has passed away.

“Was a pleasure to play alongside him. Thinking on Teri and the family, R.I.P Mark.”

James McLean took to Twitter to express his condolences and said, “Gutted to hear news of the death of my former teammate Mark Farren, great player, even better man, prayers are with his family, RIP buddy!”

Finn Harps player Packie Mailey posted, “Thoughts and Prayers with Mark Farren’s family, absolute gentlemen who showed the same fight and determination that made him one of the top strikers. RIP Farrenso.”

His first club Greencastle FC posted a beautiful tribute to their hometown hero.

“Mark we miss you the last couple of years you have been a warrior and an inspiration to all young and old, our thoughts are with your Terry, your Mum and Dad Kathleen and Micky, your sisters Bridget and Catriona and brother Philip, your in laws Artie and Linda and all your family circle.”

“Lay your head down and rest lad no one could have fought so hard we are so proud of you. RIP Mark Farren.”