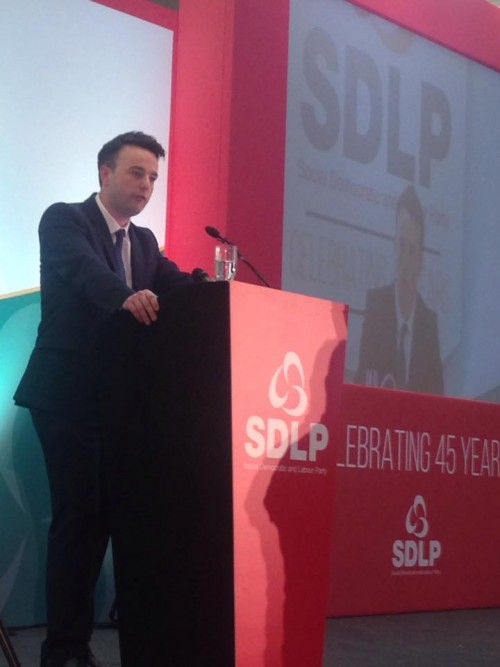 NEW SDLP leader Colum Eastwood MLA says his party will “not be bounced or bullied” into signing up to DUP/Sinn Féin proposals.

He says the 67-page Stormont House Agreement was presented to his party less than 60 minutes before an Executive meeting was called.

The SHA Mark 2 was trumpeted by Sinn Fein and the DUP as a deal that would create a better future for the people of the North of Ireland.

But victims of state and paramilitary violence feel let down as legacy issues from the past failed to be resolved between Sinn Fein and the British Government.

Mr Eastwood said that the party will interrogate the proposals which contain no provisions on dealing with the past and which attempt to cede welfare powers back to a Tory government in London.

He said: “The SDLP will assess and interrogate the DUP/Sinn Féin proposals. We will not rush to judgment but our judgement will be clear and certain.

“The SDLP and the Alliance Party were given less than 60 minutes to read a DUP/Sinn Féin document over 60 pages long.

“We were then expected to enter an Executive meeting and sign up. That is no way to get an all-party agreement.

“The absence of comprehensive proposals on the Past is a very serious failure.

“Three times before – Eames Bradley, Haass O’Sullivan and Stormont House – negotiations to address the Past did not succeed.

“Now for a fourth time, victims and survivors will be deeply disappointed. This cannot be allowed to endure. We must get back to this work. Those who persist in impeding truth and accountability cannot prevail.”

Mr Eastwood added that his party had presented extensive proposals on how to tackle criminality and paramilitarism in “real time with real actions and with real outcomes”.

“There are some useful elements in the proposals but it needed more scale, more speed and more detail.

“That’s what is needed to once and for all purge the island of paramilitarism and pursue organised crime to all the corners of Ireland.

“The SDLP submitted proposals to resolve welfare, some of which have been ‘picked up’ in the proposals.

“£60 million per annum for tax credits is a real start. But the proposal that today London will be given the power by the Assembly to legislate for the North of Ireland on welfare undoes the hard work of the devolution settlement.”

He explained that the SDLP had submitted proposals on budget, some of which have also been ‘picked up’ such as money for shared housing and to address criminality.

But what more is new as opposed to what is recycling of existing borrowing is unclear.

“This is another reason why a rush to judgment is the wrong approach. A measured judgment is needed. This includes looking at the limited proposals for economic regeneration.

“There is barely a mention of the need for city deals or investment in skills and universities.

“As with Stormont House the SDLP will affirm the good and say clearly what is not so good or downright bad.

“That is precisely what we will do now,” he added.