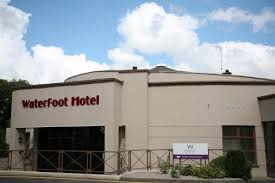 POLICE have evacuated a hotel in Derry where the PSNI had been due to host a familiarisation event.

Staff and guests were asked to leave the Waterfoot Hotel at Caw roundabout in the Waterside area for their safety due to a security alert.

Tomorrow’s event had been cancelled after it clashed with a wedding and a planned protest by dissident republican pressure group Republican Network for Unity (RNU).

It is now due to take place next Saturday, Octobeer 17.

The police are also dealing with similar alerts at Strule Arts Centre in Omagh and the Belfast Metropolitan College.

There are no further details at this stage.

Announcing yesterday that tomorrow’s event had been postponed for a week, ACC Mark Hamilton said: “A large wedding reception will be taking place at the venue on the same date, and as many people will be aware, a protest against our event has been planned.

“Those who would seek to disrupt the day have shown no thought for others.

“Out of consideration for the bride and groom, and to ensure they can fully enjoy their special day without the possibility of any disruption, we have arranged to reschedule the event.”