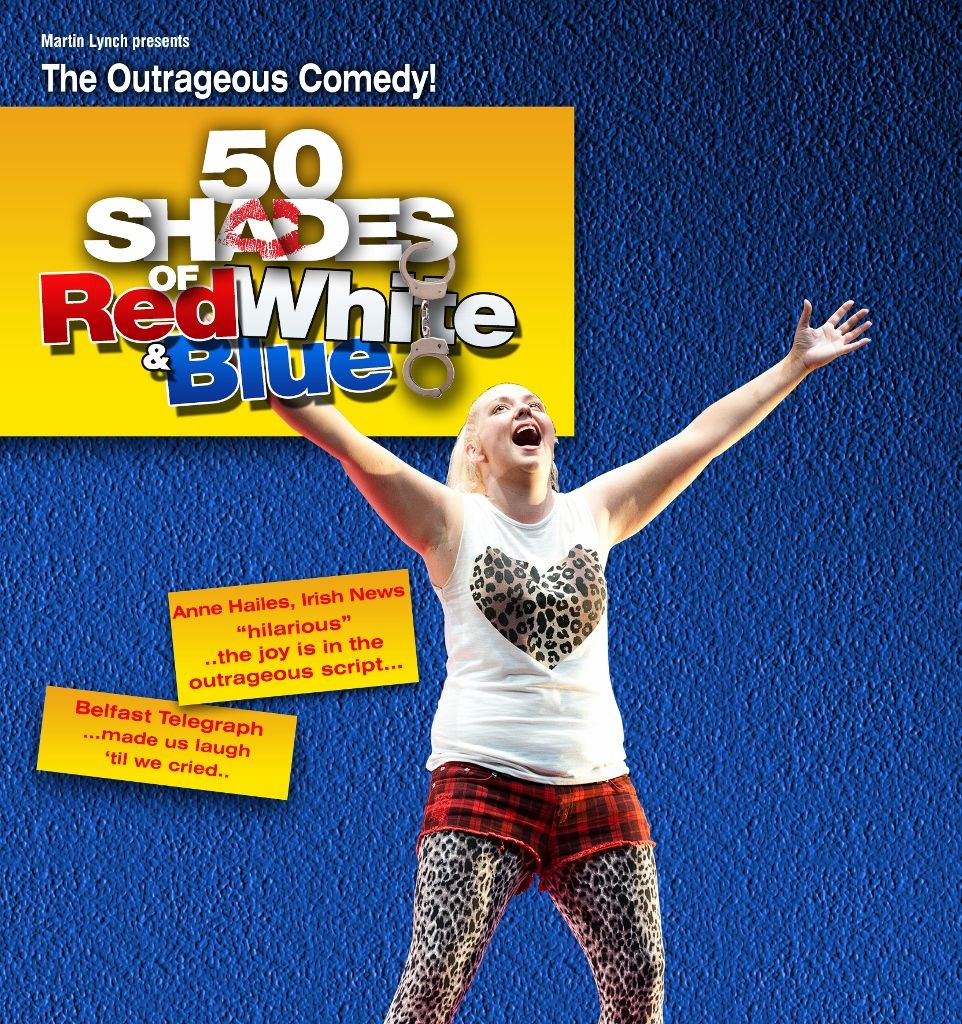 ENTERTAINMENT: SUPERB SPECIAL OFFER NOW ON AT THE ALLEY THEATRE ENTERTAINMENT: The Alley Theatre have launched a superb offer for some upcoming shows later this month!

The Alley Theatre ushers in the autumn with a packed programme of exciting and popular events for September and October that includes everything from comedy nights to drama performances, storytelling and events for kids, as well as choral performances, live music acts and even hypnosis!!

Two top class shows are on offer this weekend and the next with the laugh-out-loud ‘50 Shades of Red, White and Blue’ and the hilarious ‘Two Sore Legs’- and the Alley has an excellent joint offer of 15% off when purchasing a ticket to both performances.

A Belfast-based spoof of Fifty Shades of Grey, Fifty Shade of Red, White and Blue is sure to have you on the edge of your seats this Saturday 19th September as the loveable Maggie Muff tells her story of her search for love.

The show features laugh-out-loud characters such as big Sally Ann, Sinead the Greener and of course, the mysterious Mr Red White and Blue himself.

Caroline Curran’s performance has been lauded by the critics as one of the best ever seen on a Belfast stage.

According to GOH Chief Executive Andrew Hill: “There isn’t much to laugh about these days so do yourself a favour, get a tickets for 50 Shades of Red White & Blue…..Go see for yourself you won’t be disappointed.

“After a half hour I thought some of the people around me were in such states of helpless laughter, they would need urgent hospitalisation.”

Following its outstanding success at the Edinburgh Fringe Festival, Two Sore Legs is due to take centre stage at the Alley Theatre Saturday 26th September 8pm.

Starring Maria Connelly, Two Sore Legs is set in Belfast in the 1950’s and 60’s and is a powerful, autobiographical play telling the story of Brenda Murphy’s mother Bridie, a young Butlin’s Redcoat, who had six children by a married man who lived around the corner with his other family.

The play explores the pain, the joy and the fall-out from this extraordinary family arrangement.

From the rowdy, fractious relationship Bridie had with her own father to the explosive but hilarious visits of the local Parish Priest, this play drips explicit family emotions.  “…leaves you sobbing one minute, crying with laughter the next.” says The Edinburgh Evening News – 6*Stars!!! While the Scotsman says “……This play is the celebration of motherhood and family and the value of looking on the bright side.”

The Alley continues to offer an extensive mix of entertainment to suit all ages and tastes and this year’s autumn programme is hugely exciting with international acts such as Sean Lock, performing live.

Tickets for all events are available at the box office and online. The full Autumn / Winter programme is available for download on http://www.alley-theatre.com/brochure/  and further updates will be available via fb.com/thealleytheatre and @TheAlleyTheatre on Twitter.