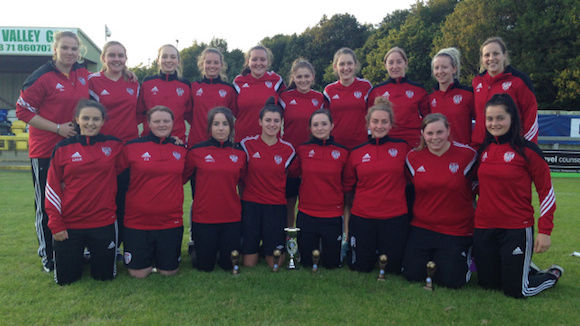 DERRY CITY TO TAKE ON LINFIELD IN PREMIER LEAGUE (DERRY CITY LADIES THAT IS!) Derry City Ladies will be taking on the likes of Linfield and Crusaders in a new Premier League next season.

City won the Championship title this week after their opponents Valley Rangers Ladies decided to forfeit Wednesday’s night final game of the season.

Liam McKinney’s side, who needed just a point to clinch the title will make a bit of history next year, as they will become the first Derry City Ladies side to play in the Northern Ireland Womens Football Association Premier League.

Clinching the title means the Ladies now have completed a treble having won both the Ballymena Ladies Cup and Foyle Cup tournaments earlier in the season.

Despite their success McKinney wants his team to finish a remarkable season by going on to win next week’s Championship Divisional Cup Final against Lisburn Ladies, which takes place on Friday September 4, at Moyola Park (KO 7.30pm).

“We have had a fantastic season so far by winning a treble, but we want to win the quadruple,” admitted McKinney.

“All the girls are delighted to have won the league and are already looking forward to facing the likes of Linfield, Crusaders and Glentoran in the NIWFA Premier League next season.

“Captain Shannon Dunne has led the team well this season and I know after the cup final all the girls will refocus and start their training programme prior to our pre-season training, which will get under way at the end of January.”