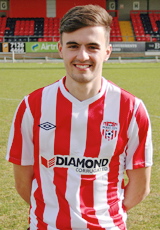 SOCCER: Derry City star Mark Timlin has been singled out for praise by former Republic of Ireland international Clinton Morrison.

Timlin, a native of Buncrana starred for Derry City in their 3-0 FAI Cup win over Edenderry Town on Sunday.

Morrison was a guest analyst on RTE show Soccer Republic – which shows the highlights of the week’s League of Ireland action.

Derry City have endured a difficult season so far and some section of the support have been calling for Peter Hutton’s head.

However, former Ipswich Town star Mark Timlin has been on of their leading lights and has been impressive all season for The Candystripes.

Morrison said, Timlin, the winger caused them all sorts of problems all day and I think he was probably the star player on show.

Click on the video above to see Timlin’s stunning free-kick.