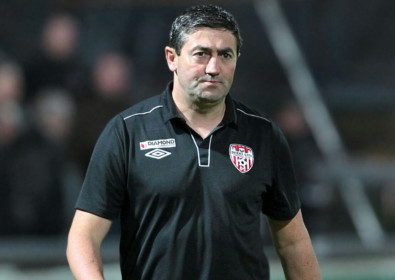 DERRY CITY manager Peter Hutton has said he has never been so embarrassed in football after his side’s humiliating defeat to Galway on Friday night. 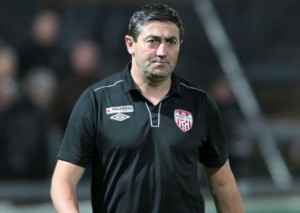 Derry were defeated 2-0 by Galway on a night when everything that could go wrong did go wrong.

The concession of two dreadful goals would’ve infuriated Hutton, and then goalkeeper Gerard Doherty was forced off early with an injury and then replacement keeper Shaun Patton also got injured.

Striker Anthony Elding was forced to go between the sticks for the final quarter of the game.

In his post-match interview a despondent Hutton lambasted his sides performance.

In an interview with RTE he said, “I’ve been in football a long time but that’s the most embarrassed I’ve ever felt.

“It’s certainly not a team that I would want to represent me and what I’m all about, so there will need to be a huge improvement in the next match.

Hutton is under serious pressure now and some sections of the support are calling for his head.

Hutton was a Derry City legend as a player and is regarded as one of their greatest ever players.

However, as a manager Hutton has struggled since taking over the reins midway through last season following the sacking of Roddy Collins.

He did take Derry City to the FAI Cup Final last season, but after an underwhelming performance St Pat’s took the silverware.

Hutton hasn’t been helped with financial constraints at the club and has lost some key players who in truth have not been replaced.

It doesn’t get any easier for his struggling side as they head to Oriel Park to take on league leaders Dundalk on Friday night.

HUTTON -“I’VE BEEN IN FOOTBALL A LONG TIME AND THAT’S THE MOST EMBARASSED I’VE FELT” was last modified: May 13th, 2015 by stephen