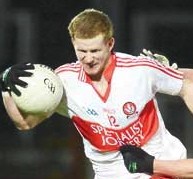 THAT’S MORE LIKE IT! LYNN ON THE DOUBLE AS DERRY DEFEAT CORK IT’S as if they saved the best to last.

Relegated Derry played football today – and beat Cork in the process of the last game in the Allianz Division One.

Enda Lynn scored both of Derry’s goals as the Oak Leafers ran out winners on a scoreline of 2-15 to 1-11 – a seven point winning margin at Owenbeg.

After the abuse from punters and pundits over last week’s dire game against Dublin, Derry were back to their very best against one of the top 4 counties in the country.

The result may be meaningless as far as Derry are concerned, but Brian McIver’s charges showed that playing real football they can get real results.

It’s exactly the tonic Derry needed ahead of the Ulster Championship with Niall Holly and Lynn in unstoppable form.

Derry had to come from behind as well, Cork were leading by 4 points at one stage.

But they showed the grit needed to haul their way back into the game and then go on and win.

Derry have been unlucky in this Division One campaign and must return to Division Two next year, but if our luck changes, there’s nothing to stop this group of Derry men doing something special this year.

THAT’S MORE LIKE IT! LYNN ON THE DOUBLE AS DERRY DEFEAT CORK was last modified: April 5th, 2015 by John
Tags:
corkDerryleaguewin
ShareTweet