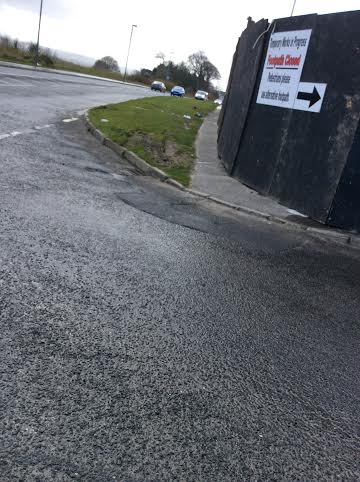 BUILDER UNDER FIRE OVER ‘DANGEROUS’ HOARDING WHICH COULD CAUSE ACCIDENT – DOBBINS 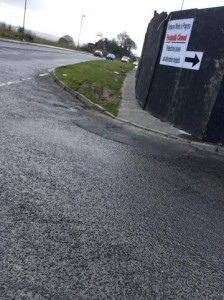 SDLP Cllr Angela Dobbins has expressed concerns that a wooden hoarding surrounding a development on the Culmore Rd is restricting motorists view and pedestrian access and will lead to someone being seriously injured.

Cllr Dobbins insisted: “This hoarding surrounds a new shopping development on the Ballynagard Rd and it forces drivers to edge out onto the main Culmore Rd to see oncoming traffic.

“I have witness two near misses in last few days.

“We have two primary schools and a secondary school in the vicinity and this road sees a large volume of traffic, it will be only a matter of time before someone is seriously hurt.

“Pedestrians are being forced onto the main road and what is more worrying is the fact that a pram doesn’t fit on the remaining footpath.

“I first highlighted this issue back in early February because the developer is clearly breaching planning stipulations, I was told then it would be two weeks before the hoarding would be down, it is now April.  I am also being told that it could take several weeks for Transport NI to assess and serve an enforcement notice.

“I have contacted the builder and expressed all the concerns of both residents and myself but have been given countless empty promises.  My only recourse is to approach PSNI Traffic & Road Division and see if they can do something as it is a clear danger to both road users and pedestrians.”

BUILDER UNDER FIRE OVER ‘DANGEROUS’ HOARDING WHICH COULD CAUSE ACCIDENT – DOBBINS was last modified: April 4th, 2015 by John