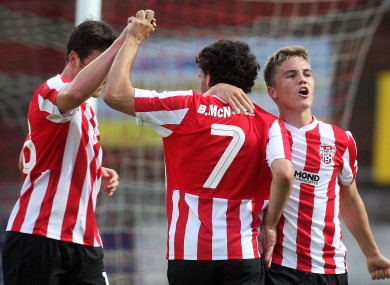 ANTHONY ELDING GOT his Derry City career off the mark at the Brandywell with a well-taken brace against Drogheda, but Barry McNamee stole the show with a stunning long-distance strike.

And when McNamee controlled Joe Gorman’s clearance on his chest, he then rifled his left-footed vollety into the net from 35 yards.

City controlled the second half and when Josh Daniels was fouled inside the area, referee Robert Rogers immediately pointed to the spot.

Up stepped Elding to dispatch his spot kick past Michael Schlingermann to end the game as a contest and secure City’s first home win of the season at 3-0.

Drogheda had started well and Sean Brennan tested Gerard Doherty with two long-range strikes early in the first half, but after Elding headed home Timlin’s cross, the home side dominated.

It was City’s second strike that brought the crowd to their feet as McNamee controlled Joe Gorman’s clearance on his chest, before rifling his volley into the net with his left foot.

Daryl Kavanagh came close to reducing the deficit from a free kick on the edge of the area, but his attempt dipped narrowly over the crossbar on the hour mark.

And when Daniels was bundled over inside the Drogheda penalty area on 75 minutes by Jason Marks, the referee had no choice but to award a penalty, while Marks was also sent off for his indiscretion.

Elding took responsibility for the spotkick and dispatched his penalty past Schlingermann for his second of the night.

The Englishman was denied his hat-trick on 81 minutes, when Mick Daly got in front of him to head Philip Lowry’s dangerous cross behind.

But it was a comfortable win for Peter Hutton’s troops, who bounced back from their midweek defeat to St Pat’s.