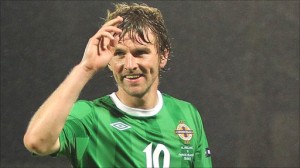 Paddy McCourt has been labelled the ‘complete player’ by Gordon Strachan.

Strachan signed McCourt when he was the manager of Celtic and knows the quality and ability that McCourt possesses.

Strachan has labelled McCourt the ‘complete player’ and also admitted that he tried desperately to keep hold of McCourt at Celtic.

Strachan said, “Paddy is as gifted a footballer as I’ve ever seen. Some players can pass but can’t dribble. Others can dribble but can’t pass. Paddy can do both.

“And I’ve got to say watching Paddy is one the best things in football.

Strachan tried to keep McCourt at Celtic Park but the man known affectionately as the ‘Derry Pele’ was keen on a move to secure more regular first-team football.

McCourt is currently on loan at Notts County after finding game time at Brighton Hove Albion hard to come by.

McCourt will be hoping to feature in the clash between the two sides in a friendly international match next week.