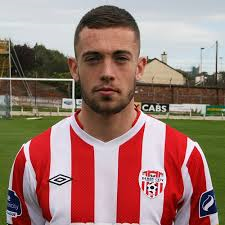 Derry City striker Nathan Boyle has joined Finn Harps FC on loan for the rest of the season.

Both clubs feel it will be mutually beneficial deal for both parties ahead of the new season which kicks-off next month.

He’s highly regarded by Peter Hutton, and the former Harps gaffer feels a season in the First Division could help his development as a striker hugely.

Boyle featured on a dozen occasions last season for Derry City, but found regular playing time difficult to come by due to the form of striking duo Michael Duffy and Rory Patterson.

With Patterson and Duffy departing in the off-season, Boyle would’ve hoped to have featured more often this season.

However, the arrivals of Anthony Elding and Cillian Morrison mean Boyle would have to play second fiddle again this season.

Rather than kick his heels on the bench, Boyle will now move to Finn Harps for the season ahead.