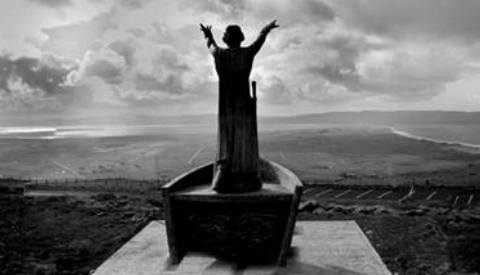 THE PSNI is hunting thieves who stole a statue of a Celtic god from the top of Binevenagh…with locals warning those who took out would have bad luck as a result.

Local tradition tells of the presence of a sea god in Lough Foyle and the widespread practice of making votive offerings to deities in Celtic times in County Derry to Manannán mac Lir, who was regarded as the Irish Neptune.

The statue is part of a heritage statue trail established by Limavady Borough Council.

Created by John Darren Sutton, it was situated at Gortmore Viewing Point, on the Bishop’s Road, a spectacular journey across Binevenagh Mountain named after the Bishop of Derry, Earl Frederick Hervey.

The sculpture of Manannán Mac Lir overlooked Lough Foyle – and was a major tourist attraction.

The PSNI says it is hunting those behind the theft.

Local people who still believe in the legend behind the god say those who stole the statue would have no luck.

“It’s a real disgrace that anyone would steal it,” said one local farmer.

“I can tell you that whoever they are will have no luck with it.”