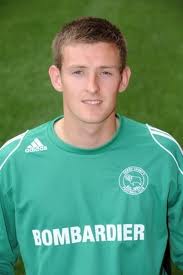 Deeney has a wealth of experience after spending several years in England.

His arrival is a massive signing for Institute, and his experience could be vital in helping Institute avoid the drop.

Institute chairman Keith McElhinney told Derry Daily, “Saul Deeney is a good player and as a committee we’re delighted to welcome him to the club.

“He’s a very good player with a lot of experience, and hopefully it won’t be long before he makes his debut.

“I’m sure he will play a massive role in our end of season performances.

Institute are also expected to re-sign former player Davitt Walsh who played for the club in 2012.

Walsh has a wealth of experience in the Irish League and his signature would be a welcome boost to an Institute attack which has been toothless since the departure of Stephen O’Flynn.

However, the form of Robbie Hum has been impressive of late, while Darren McFadden scored on his return to the club in Saturday’s Irish Cup win over Loughgall.

Walsh will add fresh impetus, he has been unattached since the summer after a spell in New Zealand with Nelson Suburbs.