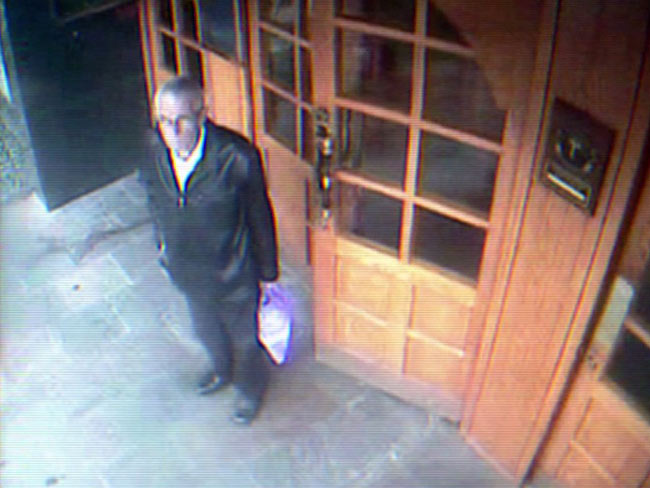 DDTV: THE MYSTERY MAN WHO CAME TO DERRY TO PLAN HIS DEATH

The Last Days of Peter Bergmann Trailer from Fastnet Films on Vimeo.

IT’S an astonishing tale – a mystery man boards a bus in Derry bound for Sligo and is found dead later on a beach.

No-one knows where he came from, or how he died. Just that he did. And that he had planned it.

He said he was called Peter Bergmann.

Where he came from or what he hoped to achieve is a mystery – what we do know is that he went to tremendous lengths to erase all proof of his existence before dying on a beach at Rosses Point, Co. Sligo. His only footprints are recorded in the haunting CCTV footage from cameras in Derry and later around Sligo City Hotel, where he had checked in for three nights under the name “Peter Bergmann.”

His body was found on the beach at dawn on the morning of June 16, 2009. He wasn’t carrying any form of identification – even the labels on his clothes were all cut off. An investigation was launched to establish his identity, but all it revealed was the seemingly painstaking measures the man took to disappear anonymously.

A recent short film “The Last Days of Peter Bergmann” paints a picture of this haunting mystery through the CCTV footage from Derry and Sligo of the man and interviews with locals who saw him during his last days, which he spent entirely alone.

The award-winning film, directed by Ciaran Cassidy, produced by Morgan Bushe and edited by John Murphy, tracks Bergmann’s first known appearance in Ireland as the moment he boarded a bus in Derry’s bus terminal, where he was quite explicit about the fact that he wanted to go to Sligo.

He was captured on CCTV footage at Ulsterbus station in Foyle Street in Derry between 14:30 and 16:00. He spoke with a bus driver and asked him was he going to Sligo. The bus driver directed him to another bus, Galway Express, which was also going via Sligo.

“All that we are really left with is his visit to Sligo. We can’t put him anywhere else in the world,” a garda would later say.

Each morning for three days the man left his hotel with a purple plastic bag to return empty handed; it is clear now that he had been disposing of his clothing and possessions little by little, none of which were ever found during the detailed investigation after his death.

Investigators believe that his scant appearances on CCTV cameras indicate he had carefully planned out his daily routes to avoid detection.

“CCTV cameras are highly visible all over Sligo town. It’s quite likely he would have identified all of their locations. If he didn’t, we would’ve picked up where he was disposing of the clothing.

“So whilst he had no difficulty with people seeing him on the CCTV and his movements, he certainly went to great lengths to ensure that the property he disposed of was never found, because that is not identifiable anywhere on any of the CCTV,” the investigator said.

After his death it became clear that there was no such person as Peter Bergmann who fit his description or age anywhere in Europe, America or South America. The address in Vienna, Austria that he used for checking into the hotel turned out to be a vacant lot.

“We [did] extensive searches throughout Sligo, be it rubbish bins, public areas, gardens of private properties, car parks; we even searched the local dump in the hope that we might have been able to find some of his property that would help us to identify who he actually was.”

On his second day in Sligo, the man had purchased eight 82-cent stamps and airmail stickers from the post office. It was never established where the letters were sent to or when, but it was likely that the man was corresponding with someone, somewhere.

Also unclear is why he chose Ireland of all places, and Sligo specifically, as the best place to attempt to vanish without a trace.

On the day before his body was found, Bergmann had asked a taxi driver to take him to the quietest beach in Sligo for a swim, and the driver took him to Rosses Point.

“He got out and had a look at the area and seemed contented. And got back into the taxi and returned back into Sligo itself. He didn’t really communicate with people. He didn’t mix with people.”

Bergmann had found the place where he wanted to die; on the next day, after arranging a late checkout with the hotel, he bought a one-way ticket to Rosses Point.

Bergmann had left the hotel with three bags, including a purple plastic one, and arrived at the bus station with only two. There he bought a cappuccino and a sandwich.

Though he hadn’t spoken to anyone on the beach, a couple of people he’d crossed paths with have spoken in the documentary about their impressions of Peter Bergmann – that he definitely stood out in his black, professional clothing, and that he was pacing around, seemingly in another world.

“He looked almost out of place and out of time,” one Sligo woman recalled.

“He had his trousers rolled up to his knees. And he was walking parallel to the water with his bare feet, he was ankle deep in the water, and he just seemed to be kind of stooped with his hands behind his back, as if he was in another world.

“He was highlighted by virtue of the fact that he was walking across the sunbeam parallel to the beach, but right through his beam of sunlight – and it was amazing because when he actually walked into the light of the sunbeam, he turned to gold as well,” another couple recalled.

A young couple passed him and said hello at 10:30 pm that night and he responded with a nod of his head.

At the crack of dawn on Tuesday, June 16, 2009, a man and his son who’d been training for a triathlon were walking along the beach when they found Bergmann’s lifeless body on the shore. At first they thought it was a mannequin.

“I said to Brian will you join me in saying the Lord’s Prayer, which he did, and we said the little prayer and brought a little bit of serenity or calmness to the situation,” the father said, before they called the Gardai (police).

An investigator said, “The clothing that was on the deceased body – he had removed each individual label from those clothes. It just shows the level of planning, the level of detail he had gone into to ensure that he was never identified,”

“We were obviously getting a picture at that stage that this man had meticulously planned his final days, his final act. And the lengths that he went to were just unbelievable.”

The autopsy showed no evidence of foul play or saltwater drowning.

What the medical examination did find, however, was that the man had extensive cancer of the prostate and bone tumors, as well as evidence of previous heart attacks.

The toxicology report showed no evidence of painkillers either, not even aspirin.

“The truth is we may never know what actually happened in those last few minutes and what he was hoping to achieve. But we can say he was there.”

Detailed investigations were carried out for months: “We explored every conceivable option that was valuable to us. We used the media boat in mainland Europe, nationally and internationally, we had secured his DNA, his fingerprints, and those were circulated to all police forces. He did not feature in any jurisdiction.’

Investigators think Bergmann may have believed that his body would be washed out to sea and never found.

DDTV: THE MYSTERY MAN WHO CAME TO DERRY TO PLAN HIS DEATH was last modified: January 8th, 2015 by stephen