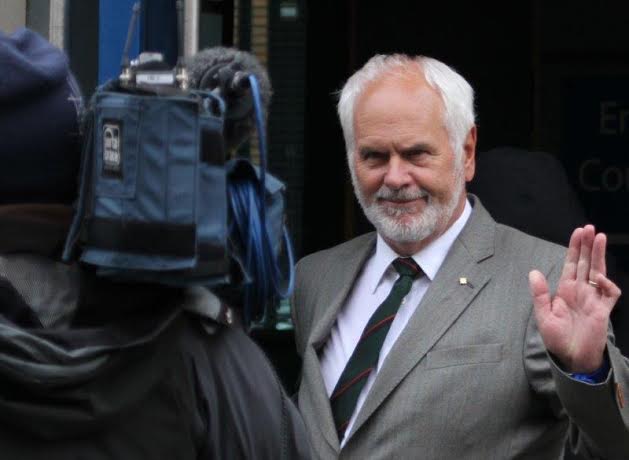 THE trial of two former RUC detectives dramatically collapsed today amid recriminations that the Police Ombudsman withheld vital statements from the prosecution.

John McGahan, 71, and 64-year-old Philip Noel Thomson were due to stand trial next year accused of perverting the course of justice over an investigation into the killing of a soldier in Derry in the 1970s.

McGahan had denied perverting the course of justice by “recording a statement after caution from Gerard Kieran McGowan which was not an independent account of his involvement in the murder of Steven Andrew Kirby” between February 27 and March 3, 1979.

Thomson had also denied perverting the course of justice by “recording a statement after caution from Gerard Kieran McGowan which was not an independent account of his involvement in the shooting of Noel Ronald Smith”.

The charges relate to an RUC investigation into the murder of Royal Welsh Fusiliers officer Lieutenant Steven Kirby who was shot dead by the Provisional IRA in February 1979 at Abercorn Road in Derry.

They became known as ‘The Derry Four’ after they skipped bail and crossed the border into the Republic.

They always protested their innocence and almost 20 years later all charges against them were dropped.

Their treatment by the RUC was investigated by the Police Ombudsman and in 2012 the matter was referred to the Public Prosecution Service (PPS).

Based on the Ombudsman’s report, the PPS decided to bring charges against the two former RUC detectives.

But today, the prosecution offered no evidence in the case.

It is understood statements held by the Police Ombudsman’s office were only recently disclosed to the PPS.

A legal source told the Derry Daily: “The director of the PPS Barra McGrory is absolutely livid about the failure of the Ombudsman’s office to disclose this material before now.”

The PPS said in a statement: “We can confirm that we have recently been furnished with certain material by the Office of the Police Ombudsman which was not made available to PPS  when the decision to prosecute was taken.

“This material undermined the prosecution case to the extent that we have concluded that there is no longer a reasonable prospect of conviction.  Accordingly, we have advised the court that we do not intend to offer any evidence against the accused.

“The Director has met with the Police Ombudsman and has expressed his concern in relation to the late disclosure of this material.  The matter is now the subject of investigation. “

In a statement following today’s decision, the Police Ombudsman said: “Given the concerns raised with us by the Public Prosecution Service, we have referred the matter to the PSNI for them to consider if it warrants a criminal investigation.”

It is understood this relates to a matter which took place in 2005 and an investigator who
no longer works for the Police Ombudsman’s office.

The complainant in the case, Gerry McGowan, said he was “disappointed” with the decision by the PPS not to proceed with the case to trial.

In a statement issued through his solicitors, Mr McGowan said after today’s hearing: ”

“It is my view that this case should have proceeded to trial and been decided by a jury.

“I am disappointed in the timing and manner in which the PPS have come to this decision.

“My lawyers have today sought access to all documents, including the newly disclosed materials, relied upon by the PPS in making this decision and I will be taking advice on this when I have seen the documents,” added Mr McGowan.