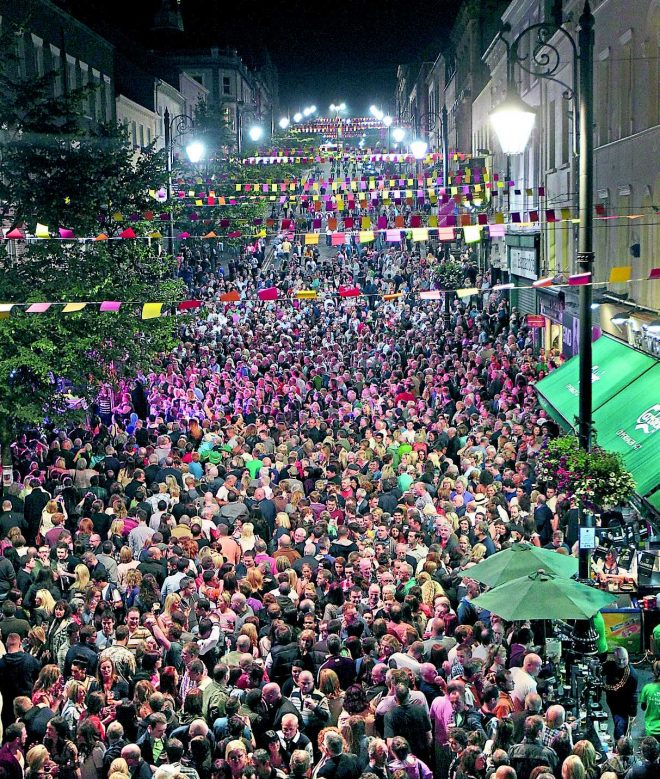 ANGRY arts groups say proposed cuts to spending on the arts will take our city of culture back to the dark ages.

Eileen Walsh, the Chairperson of the Cultural Partnership Forum, which is the representative collective voice for the arts community in the city has made an impassioned plea on their behalf.

“This is a critical time for the city. Many feel that as a city, we have undergone a crucial period of transformation, of moving into the light, particularly after a hugely successful year as UK City of Culture,” she told Derry Daily.

“Despite a long history of chronic underinvestment in this region, local arts organisations rose to the challenge last year to deliver an excellent programme of arts and cultural events.

“We welcomed hundreds of thousands of visitors to a veritable feast of cultural events and activities, showcasing our beautiful walled city, with its rich heritage and friendly inhabitants.

“The city gleamed for all the world to see and take note. Soon we began to feature on ‘must-see’ destination lists in world travel guides. There was an air of confidence. And optimism.”

Now everything has changed, said Eileen.

“Things look decidedly bleaker now. There are huge concerns in the arts sector about proposed cuts which many feel would be a devastating blow to the regeneration of the city,” she insisted.

“The draft budget for Northern Ireland, which is out now for consultation until December 29th, proposes cuts across many different government departments.

“These proposed cuts in funding could be devastating for the city and will hugely affect local arts organisations and venues. This will inevitably result in job losses in an already investment-stricken region. We can’t forget that Derry still has the highest unemployment levels in the UK.

“Culture and the arts are at the heart of the social, economic and physical regeneration of the city and region. And the arts are a key employer, employing 40,000 people in Northern Ireland. The sector is actually bigger than agriculture and it contributes over £714 m to the local economy.

“The arts also bring huge economic benefits to Northern Ireland and are a key driver for tourism. The top five arts events held last year during the UK City of Culture attracted over 330,000 visitors to the city.”

She said the enormous benefits that the arts deliver to our society, both in terms of health and well-being and also with regard to education are well-documented.

She went on: “Over the last year one of our member organisations, the Nerve Centre, delivered training in digital literacy skills to almost 7000 young people and 5,000 teachers in Northern Ireland.

“Only recently we learnt the disturbing news that these proposed cuts could mean the loss of up to half their staff across their Creative Learning Centres in Derry, Belfast and Armagh as well as the Foyle Film Festival and their film education programmes.

“Everyone is affected. All organisations large and small are facing cuts that will drastically affect their organisations. This week I also learnt that another member organisation Greater Shantallow Community Arts are to lose one of only three full posts that they have.”

The citywide Community Engagement project, designed to encourage access and participation in arts and cultural activities within our most deprived communities is set to be axed next year, she said.

“Where is the legacy from City of Culture year there?’ she asked.

Eileen is also elected representative for individual artists on the Cultural Partnership Forum.

She added: “Make no mistake, these cuts would take us back to the dark ages. They would be hugely damaging. And it’s not just organisations who will be affected. We also have to think about our local economy and jobs. The city cannot afford to lose any more jobs.

At present the North’s administration invests only 13 pence per person per week in direct funding for the arts, which works out at a tiny 0.1% of total government spending.

The consultation period is open until December 29th.

You can give your view by emailing DCAL directly on budgetconsultation@dcalni.gov.uk before December 29th.

You can also email the Executive on budgetconsultation@dfpni.gov.uk.

Members of the public are also urged to support the Arts Council’s 13p per Week for the Arts campaign on http://www.artscouncil-ni.org/showcasing-the-arts/advocacy.

‘CUTS TO THE ARTS ARE TAKING DERRY BACK TO THE DARK AGES’ was last modified: December 18th, 2014 by John
Tags:
artscutbacksDerryeileen walshfundingNerve Centre
ShareTweet