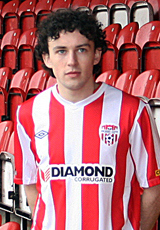 Derry City star Barry McNamee has returned home early from a trial at English League One side Fleetwood Town.

Derry City’s Barry McNamee could be on his way in January.

The talented midfielder has courted interest from a number of League Of Ireland clubs with both Sligo Rovers and St Patrick’s Athletic making no secret of their desire to sign McNamee before pre-season begins in January.

However, McNamee who has had trials with Nottingham Forest and Bristol Rovers in the past is on the radar of a number of sides in England.

Unfortunately for McNamee is trial at Fleetwood Town was cut short due to an ankle injury.

It’s not yet known if he’s to go back over their when his ankle is healed, but he was reported to have been impressive before injury struck him down.

St Patrick’s Athletic remain the hot favourites to land him as it looks certain he’s heading for The Brandywell exit door.

Rumours are rife that McNamee was fuming when he was left out of Derry’s starting XI for the Ford FAI Cup Final against St Patrick’s Athletic in November.

DERRY CITY STAR MCNAMEE PICKS UP INJURY WHILE ON TRIAL WITH ENGLISH LEAGUE ONE SIDE was last modified: December 9th, 2014 by stephen