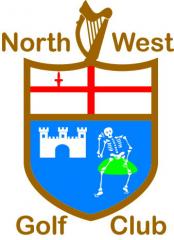 Neil Harkin was best of the bunch with a topsy-turvy score of 39 points to win yesterday’s Christmas Fayre competition at North West Golf Club.

After three holes, Terry had only scored three points but birdies at the fourth, fifth and 10th equated to a blistering one under par gross for the next 15 holes and a winning score of 41 points.

In second place, also on 41 points, was 14 handicapper Declan Rennick.