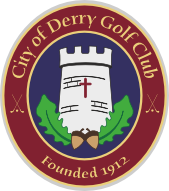 Clive Brolly (13) was the clear winner of yesterday’s competition at City of Derry Golf Club, scoring an unbeatable 39 points over the 15 holes played (early onset of darkness precludes any longer competitions).

Twenty-four points of his total were scored at eight of those holes and finished one point clear of second placed Dennis O Connell (18) who is enjoying a fine run of good form lately.

A bottle of spirits went to Gerry Cleary (18) who was best of a quintet on 37 points for third place, his superb finishing nine holes getting him the verdict on a count back.