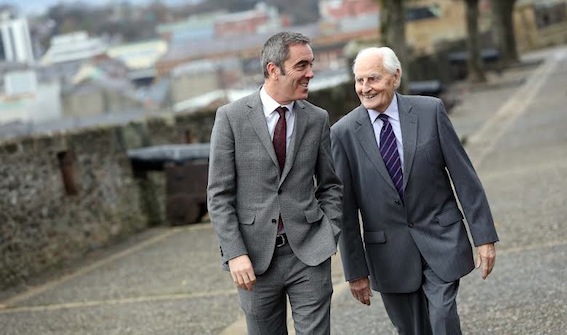 James Nesbitt and his father, James, take a stroll on Derry’s historic Walls he and the walls were named as Northern Ireland’s National Treasures. following an online poll to celebrate 20 years of the National Lottery. Photo: Lorcan Doherty Photography

Derry’s Walls are among the North’s best loved treasures after seeing off the Giant’s Causeway in an online poll held to celebrate 20 years of the National Lottery.

The 400-year-old walls have been named as Northern Ireland’s most iconic place in a survey which asked the general public to choose from a range of venues which had received National Lottery funding.

The TV and film star was honoured for his role as Chancellor of the Ulster University and his patronage of charities Action Cancer and WAVE Trauma Centre which have all received National Lottery funding.

The National Treasures were announced ahead of the 20th anniversary of the first National Lottery draw, which will take place this Wednesday.

Both the actor and the walls were honoured at an event at the Verbal Arts Centre, where Nesbitt took time to meet students from the centre’s journalism course and join in a session of the Reading Rooms – a literacy and literature project – with the local Rathmor 50+ community group.

Speaking at the event, the actor said he was delighted to see the recognition given to the walls.

He added: “My affinity to the city grew when I played the role of Ivan Cooper in Bloody Sunday. It is fitting this landmark, which has played such an important role in the city’s past, has its heritage preserved and protected for future generations.”

The Holywell Trust in Derry, received £446,000 in National Lottery funding, via the Heritage Lottery Fund, for the City Walls Heritage Project to engage people with the heritage of the Walled City and ensuring they are valued, protected and cherished for years to come.

The walls came out top of a shortlist made up of  the Giant’s Causeway, the Ulster Museum, Sam Thompson Landmark Bridge, SS Nomadic, the Strule Arts Centre, Omagh, the Ulster Hall, the Metropolitan Arts Centre (MAC), the Lyric Theatre, the Albert Clock, St Patrick Visitor Centre, Downpatrick and the Odyssey Complex.

More than 66,000 votes were cast in the survey, which took place online in May this year.