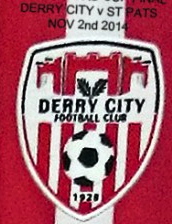 THE WINNER OF THE DERRY CITY FAI CUP FINAL JERSEY IS…..

Bailey Nelis is the winner of the specially produced Derry City cup final jersey in the draw run by the Brandywell club.

Bailey’s number, 138, was selected by the club’s “random number generator.”

THE WINNER OF THE DERRY CITY FAI CUP FINAL JERSEY IS….. was last modified: October 29th, 2014 by stephen