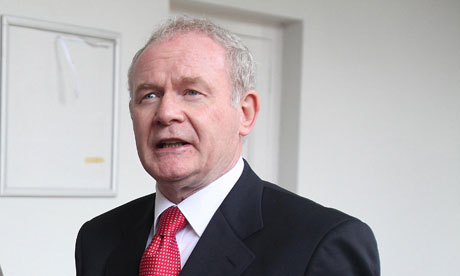 Sinn Féin MLA Martin McGuinness has appealed for a common approach with Scotland and Wales to ensure maximum decision-making powers in the three Assemblies.

Martin McGuinness said: “No one should be under any illusions about the scale of the financial crisis which is facing the Executive as a direct result of the British Government’s austerity agenda.

“The Block Grant has been raided every year since the Tory-led coalition came into power in Westminster.

“But there is worse still to come. The Tories have made it abundantly clear that they are ideologically committed to dismantling the welfare state and the destruction of public services. They intend to slash the North’s budget even further in the years ahead.
“Scotland and Wales are facing the same challenges and these discussions with Alex Salmond and Carwyn Jones provide an opportunity to agree a joint approach to the challenges ahead.”

Mr McGuinness  concluded: “There is no reason why we cannot do that because there is already a great deal of common ground between ourselves, the Welsh and the Scottish.”