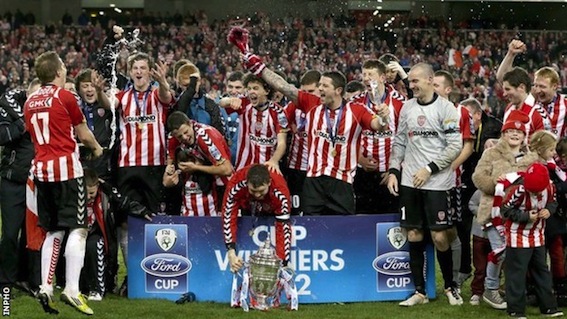 Tickets for Derry City’s FAI Cup Final clash with St Patrick’s Athletic at the Aviva Stadium in Dublin on 2 November next will be “very reasonably priced” when they go on sale next week, the Brandywell club has said.

City booked their place in the final with a last gasp semi-final replay win over Shamrock Rovers at the Brandywell on Tuesday night last.

Up to 4,000 City fans are expected to travel to Dublin for the final and club director, Sean Barrett, has said ticket prices “won’t be prohibitive.”

He added: “Tickets will be on sale from the Brandywell next week and will be priced very reasonably.”

The 2 November clash will be the third time in nine years, Derry and St Pat’s have met in the final.

The Dubliners, seeking to win the trophy for the first time since 1961, were beaten 3-2 two years ago by a side managed by Declan Devine and lost 4-3 after extra-time to a Stephen Kenny-led Derry team in 2006, a game described as one of the best ever FAI Cup finals.

Mr McCartney, a lifelong fan of the Candystripes, said: “I would like to congratulate the team, manager Peter Hutton and all the backroom staff on getting to the 2014 FAI Cup Final.

“It’s a major boost for the city and club, the final at the Aviva Stadium will be a great day out for the club and supporters. I wish them well.”