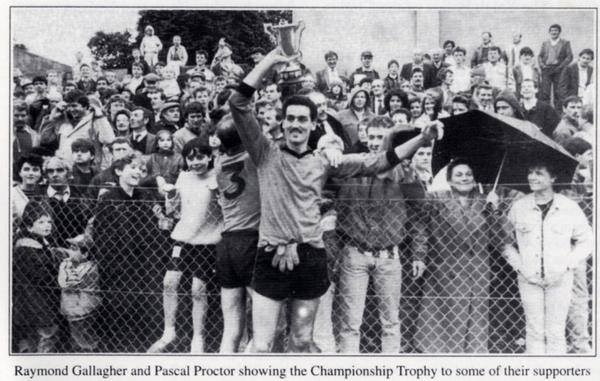 HEARTACHE AS SLAUGHTMANUS 26-YEAR WAIT FOR A TROPHY CONTINUES

Back in the day…Slaughtmanus with the title in 1988

YOU know it has been a long time since your team won a county title when the last snap of them doing so is in good old black and white.

And on Sunday they came agonisingly close to ending the drought.

Maybe it was the nerves which saw them start poorly but at the end of the Intermediate Championship final at Owenbeg, they had lost by seven points to six to Castledawson.

The Slaughtmanus lads will look back at this game and wonder where it all went wrong.

They dominated the first half, yet didn’t register a score and were four points down at the break.

Everyone who was there will also wonder what referee Peter O’Connor saw in the 20th minute because everyone else saw Chris Deery being hauled to the ground. But the ref didn’t give it – and even the Castledawson fans couldn’t believe it.

This came five minutes after another penalty appeal by Slaughtmanus was turned down, the Castledawson keeper using a foot tackle to block a goal-bound effort by Adrian O’Kane.

It wasn’t to be – as Castledawson shut up shop as Slaughtmanus closed the game down to a point.

HEARTACHE AS SLAUGHTMANUS 26-YEAR WAIT FOR A TROPHY CONTINUES was last modified: October 6th, 2014 by John