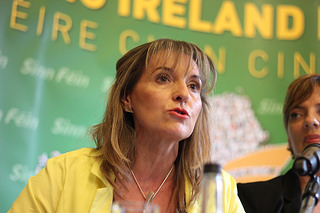 Sinn Féin MEP Martina Anderson is attending the Russell Tribunal at the European Parliament in Brussels on the recent Israeli bombardment of Gaza.

The international tribunal, which has gathered evidence of Israeli war crimes in Palestine, is currently meeting at the European Parliament.

Speaking after attending the tribunal, Ms Anderson said: “The Russell Tribunal is looking at the recent Israeli onslaught on Gaza which killed more than 2,000 Palestinians and sparked a humanitarian crisis.

“The Tribunal has already heard testimonies from a number of witnesses, including respected international experts.

“A range of topics have been discussed, including the devastating impact of munitions, many of which were supplied by the United States, on homes in Gaza.

“The shocking level of racism, hate speech and incitement to attacks on Palestinians and those challenging the status quo within Israel, has also been raised by witnesses.

“One of the most powerful testimonies came from a former Israeli soldier who had been collecting first-hand accounts from soldiers involved in the recent conflict.

“He spoke movingly about revenge attacks carried out by the Israeli Defence Forces against civilians in Gaza.”