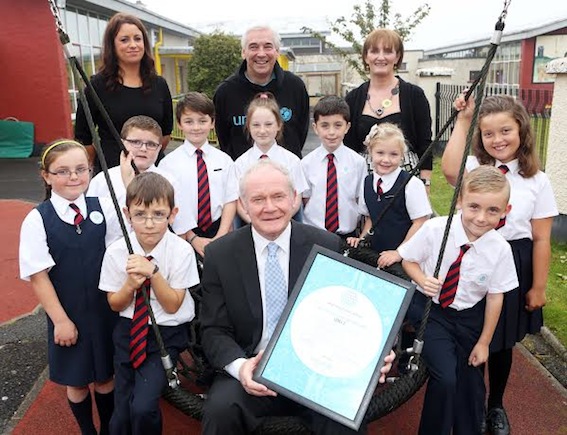 The award marks a four year journey of the staff, pupils and governors who are now one of only a select group of 13 primary schools across the North to achieve Level Two status.

The Rights Respecting Schools Award (RRSA) recognises achievement in putting the United Nations Convention on the Rights of the Child (CRC) at the heart of a school’s planning, policies, practice and ethos.

A rights-respecting school not only teaches about children’s rights but also models rights and respect in all its relationships: between teachers / adults and pupils, between adults and between pupils.

Speaking at today’s event, Mr McGuinness said receiving the award was a “fantastic achievement” for the school.

“You don’t achieve awards of this nature without considerable hard work and effort by teachers and pupils alike.

“I congratulate Miss Orla McDonnell, School Principal and everyone within the Holy Child community for participating in such a worthwhile programme.”

Mr McGuinness said the school played an important role in the Creggan area and the skills and lessons the pupils had gained through the programme would extend beyond the school gate.

He added: “This award will help teach the pupils the importance of respect and reminds our young people they are the future.”

Mr McGuinness concluded: “The pupils of Holy Child are a great source of hope and confidence for the future and I wish the school and all the pupils continued success.”

Principal Miss Orla McDonnell said the school was “extremely proud” of its achievement.

She added: “The Rights Respecting Ethos is now part and parcel of who we are and how we live each day in our school.

“The children, staff and more importantly, their families and the wider community in Creggan, have all contributed to this new culture which further complements our strong Catholic Ethos.

“It is therefore only right and fitting that we should celebrate and we intend to do this in style!

“We are delighted that Paul Clarke and the Deputy First Minister, amongst others, have agreed to come along and share in our celebration. The short ceremony in the hall will be followed by a full Autumn Fete from 12pm until 2pm for all our pupils and parents. This will be a day to remember!”

Thomas McCallion, chairperson of the school’s board of governors, receiving the “fantastic award” heralded a new era for the school and local community.

He added: “It acknowledges the tireless work of its pupils and staff who have always promoted a culture of respect and mutual understanding among the wider school community.

“In addition, it further signifies the growing stature of Holy Child PS and the central role that it plays in developing the Creggan area in terms of social, educational and physical regeneration.”

Mr McCallion concluded: “I have always been honoured to have been part of this school and to see its continued development for nearly 10 years and I look forward to welcoming our Deputy First Minister and other dignitaries as they share in our story.”