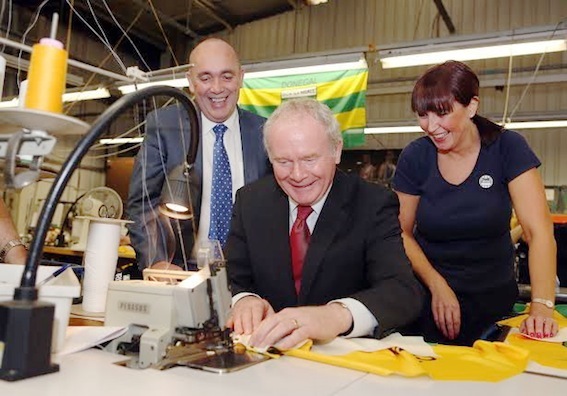 DONEGAL HAVE ALL-IRELAND FINALS SEWN UP: COUNTY IS “IN MY BLOOD” – MCGUINNESS Martin McGuinness stitching a Donegal jersey together, under the supervision of Kieran Kennedy, managing director, and staff member Josie Friel,from Lifford, during his visit to O’Neill’s in Strabane. Photo: Lorcan Doherty Photography

Deputy First Minister Martin McGuinness will be supporting Donegal when the county takes on Kerry in the senior and minor All-Ireland football finals at Croke Park on Sunday.

Speaking during a visit today to O’Neill’s Irish International Sports Company Ltd in Strabane – who have made the jerseys for both finalists – Mr McGuinness said while the firm had shown no favouritism, he would be supporting only one team.

He said: “While O’Neill’s has shown no favouritism by making the kits for both teams, my mother was from Buncrana and Donegal is in my blood so I will be hoping for a Donegal win on Sunday.”

Mr McGuinness was invited by Kieran Kennedy, managing director of O’Neill’s to see at first hand the jerseys, shorts and socks of the two finalists being made.

Mr McGuinness added: “O’Neill’s has been in Strabane for 40 years and is an important employer in the North West. It is one of the last large scale textile manufacturers in the north of Ireland employing almost 400 people.

“The textiles industry is a very dynamic sector and is not without its challenges but the ability of O’Neill’s to respond and react to the needs and requirements of the market have played an important role in its continued success.

“Having the opportunity to view the skill and dedication of the staff at O’Neill’s was very insightful.

“The success of the company in Strabane over the last 40 years is in no small part due to the commitment, loyalty and dedication of their team. I wish Kieran and everyone at O’Neill’s every success for the future.”

Kieran Kennedy, managing director of O’Neill’s said they were delighted to welcome the Mr McGuinness ahead of Sunday’s finalsl to showcase the firm’s production facilities.

DONEGAL HAVE ALL-IRELAND FINALS SEWN UP: COUNTY IS “IN MY BLOOD” – MCGUINNESS was last modified: September 17th, 2014 by stephen
Tags:
alldonegalfinalsIrelandkerrymartinmcguinnesso'neillstrabane
ShareTweet