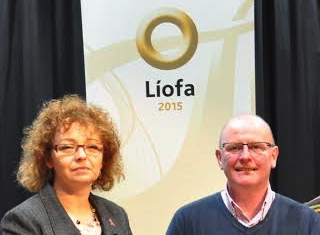 A series of free intensive Irish language classes offered by the Department of Culture, Arts and Leisure (DCAL)  as part of the Líofa initiative has been welcomed by Derry Sinn Fein Cllr Kevin Campbell.

Cllr Campbell said Culture Minister Carál Ní Chuilín’s announcement of the courses to be held across the North was “great news” and would cater for all levels of learners, from complete beginners to more advanced speakers.

Cllr Campbell said :”The intensive courses are a great opportunity to start learning Irish or to brush up on whatever Irish you may already have.

“They also provide advice on follow-up classes in your local area.

“These free classes are being offered at a range of locations in each of the Six Counties as part of the hugely successful Líofa initiative pioneered by Carál Ní Chuilín, which is promoting fluency in Irish.”

Cllr Campbell concluded: “This further highlights Sinn Féin’s commitment to the promotion and development of the Irish language.”