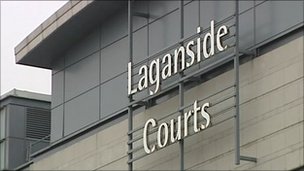 Detectives from the PSNI’s Serious Crime Branch have welcomed the eight year sentence imposed on a 41-yearold Derry man for a series of terrorism charges.

In June last year police carried out a number of searches at a property in Beechwood Avenue in the city rented by Kevin Barry Concannon.

During the search officers uncovered a number of items including: a de-activated sub machine gun fitted with a real magazine, high explosive (PETN), blank rounds of ammunition, a set of number plates and a smoke grenades and a thunderflash.

Police also seized a laptop which contained images of a suspected terrorist show of strength, images of Merseyside Police headquarters in Liverpool and a copy of the Anarchist’s Cookbook.

Last June, Concannon pleaded guilty to having the items and to collecting information likely to be of use to terrorism.

Today, he was sentenced to four years in custody to be followed by four years on licence.

Welcoming the sentence, Detective Superintendent Kevin Geddes, from Serious Crime Branch, said: “Our investigation has negated the potential for harm which was posed by a number of these items.

“Police will continue to work to bring before the courts any individual who involves themselves in terrorist activity. The streets of Derry and elsewhere are undoubtedly safer today as a result of our investigation.”