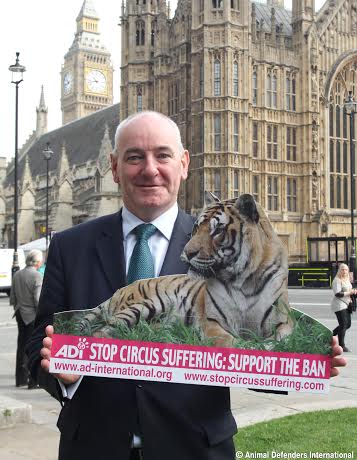 Foyle MP Mark Durkan supporting the introduction of a new Bill at Westminster this week banning the use of wild animals in circuses.

A new Bill introduced by the British Parliament which see a ban on the use of wild animals has been supported by Foyle SDLP MP Mark Durkan.

Parliament voted unanimously in favour of a ban in 2011, and the government first announced that it would take action on this issue in March 2012.

However, a delay in bringing in a ban has seen the number of wild animal acts increase and the return of “big cats” to circuses in Britain.

This Bill (which is identical to the one published by the government last year and scrutinised by MPs) would ban acts involving animals such as tigers, elephants and monkeys by the end of next year.

Mr Durkan, a long-standing supporter of the campaign for the ban spearheaded by Animal Defenders International (ADI), said it was important that the Bill could become law quickly so that the wild animals currently performing in circuses could be spared any further suffering.

He added: “Given the level of public support that the ban enjoys – a resounding 94% – I am hopeful progress can be made.”

ADI President Jan Creamer said he was delighted to have the support of Mark Durkan on this important issue.