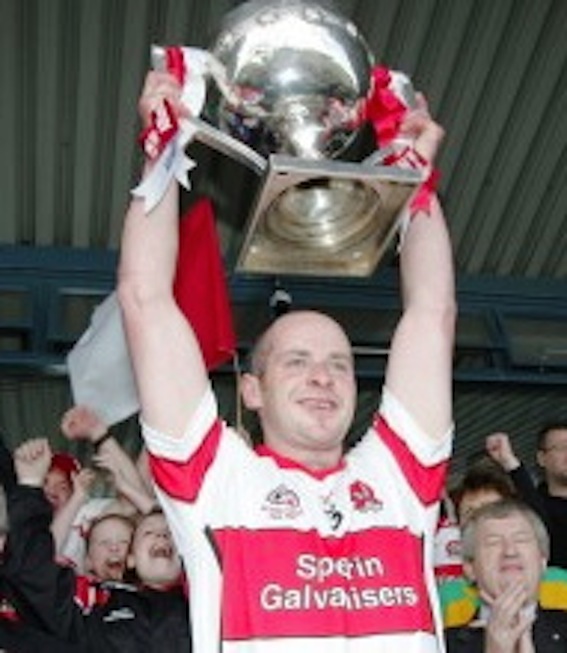 KEVIN MCCLOY THANKS MEDICS FOR SAVING IS LIFE Former Derry GAA senior football captain has thanked medical staff for saving his life after he collapsed on the pitch playing for his club Lavey last week.

The 38-year-old  was revived with the aid of a defibrillator after taking ill ten minutes into Lavey’s championship clash against Magherafelt at Owenbeg in Dungiven on Wednesday of last week.

After receiving treatment on the pitch, he was rushed to Altnagelvin Hospital in Derry where the former All-Star and his wife, Cathy, said his condition was improving thanks to the “excellent care” he was receiving there.

In a statement, the couple thanked all the physics, doctors and paramedics for their “quick thinking and life saving efforts” at the scene which, along  with the defibrillator, “ultimately” saved his life.

They added: “We would also like to thank everyone for their prayers and support over the last week.”

Last week’s match was abandoned and has been rescheduled for Owenbeg tonight with the Cormac Trust – the charity set up to raise awareness of cardiac arrest in young people in memory of Tyrone county captain Cormac McAnallen who died suddenly a the age of 24.

The  Armagh schoolteacher was found dead in his bed in March 2004.

Kevin and Cathy McCloy have urged those attending tonight’s game to support the charity.

They said: “We would ask that everyone would support the Cormac Trust at Thursday’s match, in whatever way they can.”